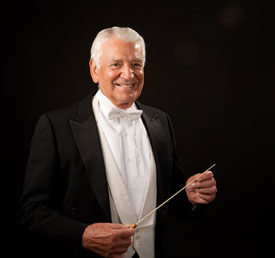 Scroll down for more about Maestro Mostardo and the San Diego Festival Chorus and Orchestra.

Born in Italy,  Maestro Mostardo received his early musical training from Maestro Giovanni Berrafato, a noted composer, arranger, and conductor. He is a graduate of the American Conservatory of Music in Applied Piano, and has earned a Bachelor of Music degree from Northern Illinois University and a Master of Music degree from De Paul University. He holds a Certificate of Advanced Studies in Aesthetic Education from the University of Illinois and has continued doctoral studies in education administration at Northern Illinois University.

Mr. Mostardo received awards for work in advancing the interest of music and the arts in the school curriculum and frequently acts as adjudicator of music events.

As music coordinator and school principal for thirty-seven years in Elk Grove School District 59, a Chicago suburb, Mr. Mostardo taught instrumental and choral music in grades Kindergarten through fourteen. He lives in Spring Valley with his wife Greta, also a member of the San Diego Festival Chorus and an accomplished musician.

Mr. Mostardo also founded and directed several musical organizations. In 1965 he organized the Festival Chorus and Orchestra at William Rainey Harper College in Palatine, Illinois, a suburb of Chicago, with 50 members growing to a chorus membership of over 150 by the time of his retirement in 1997. Following his move to San Diego in 1998, he founded the San Diego Festival Chorus and Orchestra. Since its inception, the San Diego Festival Chorus has grown from its initial membership of 46 to its present 90. An orchestra of 48 members was added to enhance chorus performances. Our performances now involve over 125 singers and instrumentalists per performance featuring outstanding San Diego area vocal soloists.

During a short span of fourteen years, the San Diego Festival Chorus and Orchestra has performed over 57 major choral works including 23 outreach concerts in places of worship and retirement communities. Additionally, members of the Chorus have participated in four concert tours to the Czech Republic, Hungary, Austria, Iceland, Scandinavia and Italy, performing concerts in the great cathedrals and performance venues to standing room audiences. Our 2009 concert tour of Italy culminated in a July 3rd worship service performance at Saint Peter’s Basilica in the Vatican attended by over 400 people.