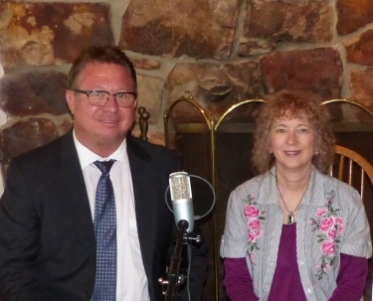 May 25, 2018 (El Cajon) – El Cajon Mayor Bill Wells, candidate for the 50th Congressional district currently held by Rep. D. Duncan Hunter, sat down for an  interview with East County Magazine’s show on KNSJ radio. In his interview, he spoke about both conservative values and a need for compassion in addressing a broad range of issues, as well as how his experience heading up the city of El Cajon has prepared him for serving in Congress, if elected.

Hear the full interview by clicking the audio link and scroll down for highlights.

Asked why he decided to run, Wells says, “It really started with elected officials across the region worried about the Congressman being under criminal investigation.”  Both Wells and Hunter are conservative Republicans.

To Wells, the race is primarily about character and integrity. In a thoughtful and in-depth interview, he also discussed some areas where his views differ, such as budget cutting priorities and restraint with nuclear weapons, as well as some initiatives of his own in healthcare and treatment of the mentally ill.

He says that Supervisor Dianne Jacob as well as members of the La Mesa and El Cajon City Councils urged him to run. For Republicans, there is concern that with a grand jury being convened, Hunter could be indicted before the November election.

He believes his disadvantaged background, growing up in poverty, child of an alcoholic father who committed suicide, has given him strength, self-reliance and compassion, “understanding where people come from.” Wells holds a PhD and works as a nurse helping the chronically mentally ill.

He holds similar views to Hunter on limited government, reducing the national debt, pro-life and the Second Amendment, though he mentioned after our interview that he would keep guns out of the hands of the mentally ill.

However he differs with Hunter on spending.  “I get the sense that he’s comfortable with a massive amount of spending as long as the military is getting the lion’s share. I also support a strong national defense, however, the last omnibus spending bill that he voted for, I would have voted against. We have a $21  trillion national debt,” he said, criticizing Republicans in Congress for spending at the same rate that Democrats did in the last administration.

As Mayor, Wells has worked to reduce homelessness and help the mentally ill.

“We have a massive mental health crisis in the U.S. right now,” he said, noting that mental illness along with drugs and alcohol affect issues ranging from homelessness to school shootings to opioid addiction. He says that solutions must be multiple. He wants to see mental health hospitals reopened, though with protections for individual rights to prevent abuse.

On healthcare, he notes that Obamacare helped some get insurance without paying but made rates too high for others, forcing middle class voters to subsidize others. But he also faults Republicans for seeking to repeal Obamacare with no replacement. He believes there should be county, state or federally run hospitals where medical students, nurses and dental assistants could work to serve those in need, while reducing their student loans.

Rep. Hunter has called for use of nuclear bunker bombs and a first strike on North Korea. Wells calls nuclear weapons “horrific” and says they should only be used “if there are no other options on the table. I pray that that never happens in my lifetime or my children or grandchldren’s lifetime.”

He views trade imbalances as key foreign policy challenges and believes that pacts such as NAFTA and CAFTA need to be revamped to “equalize imbalances.”

He says he is worried about “unrestricted immigration policy” in Europe but adds, “America is a country of immigrants, the basic policy is that America is a place where you can come and seek freedom, and I like that. I think we should continue that,” but he also believes America has a “right to maintain a culture” such as encouraging immigrants to speak English and assimilate.

He says he’s concerned in Europe over massive amounts of predominantly Muslims creating “massive ghettos within the big cities where people who are indigenous to those regions are not welcome. They call them no-go zones.”  But Wells sees a difference between extremists and others, noting that he recently gave out backpacks to Syrian Muslim refugees in El Cajon who he found to be warm and loving families.  To Wells, vetting is key to U.S. immigration policy.

Mayor Wells has been a critic of California’s sanctuary state laws. He wants police to be able to cooperative with federal immigration and law enforcement officials.  He does not see a conflict with voicing concern that authorities be able to turn criminals such as violent gang members over to immigration, while also showing compassion for immigrants who came here illegally years ago but have been law abiding and contributing to society since then. He does not believe that the U.S. should deport such people, including young people brought here as children (DACA recipients).

“Compassion should be the bylaw – what all political people, people elected to represent the public.  If compassion isn’t your first go to, then you are in the wrong business because we are here to protect people. Now sometimes protecting people means setting tough boundaries, but I think we should look at each case separately and make compassionate decisions.”

Hunter has taken huge sums from special interest groups such as tobacco companies, while vocally supporting vaping and other tobacco products legislatively.  Wells, by contrast, took tobacco and alcohol donations but voted against their interest at times, notably by backing El Cajon’s tough laws cracking down on stores selling alcohol to minors and serial inebriates.  But he believes that political donations are “free speech.”

Wells believes climate change is a “hoax” and notes big money pouring into the cap and trade system in California.  He says he’s concerned about falsification of data and believes warming is cylical, but would be open to new evidence. He disputes data showing warming trends in recent years.  “Government should not be as partisan as it is on this,” he says, adding that if we had an Ebola outbreak in the U.S., similarly it should be approached in a bipartisan manner.That said, he wants to see a balance between protecting public health vs.  industry interests.

As for his budget priorities and how to reduce the deficit, he cites wants to see lower taxes and “getting government out of the way of business” so businesses can thrive and create wealth.  He cites companies like Microsoft and Apple as examples of companies that created a “massive amount of wealth” and sees that as a means of helping the entire country.

He calls Social Security and Medicare “vital parts of the safety net” and says the country needs these, noting that people have earned them. But he wants to look at cutting any waste, fraud and abuse.

Fundraising remains a challenge, since some donors are afraid to go against the Hunter dynasty. He’s relying on both old-style campaigning and new-style social media to win the primary. “I’m predicting an upset,” he says, adding that many people have said, “Don’t tell anybody, but I’m going to vote for you!”

There are numerous candidates in the race, including prominent Democratic contenders Ammar Campa-Najjar, a former Obama administration Labor Department official endorsed by the Democratic Party, and Josh Butner, a retired Navy Seal. The top two-vote getters in the June primary will advance to a run-off in November.

Bill Wells believes that his experiences as Mayor has helped him prepare for Congress and handle unexpected situations. For example, he recalls “learning to deal with groups of people in a crisis situation” after a police shooting of an African-American man sparked civil unrest. Some have credited the Mayor’s calm and respectful treatment of everyone with preventing the sort of destructive protests seen in other cities across the U.S. at the time.

He voices pride in lowering taxes, boosting revenues by bringing in car dealerships and four-star hotels, and balancing the budget.  “We also got rid of all building impact fees, because we wanted people to come build houses here,” and made other changes to make the city “as family friendly as we possibly can,” such as having a great parks and recreation department, an America on Main Street celebration and more.

“I’m proud of all of that. No matter what happens, being mayor of El Cajon will be a highlight of my life,” he concludes.

Wells says when he got into politics he expected a lot of corruption and negativity, but was surprised at “the quality of most of the people on both sides of the aisles that are involved in politics.” As for most local officials, he observes, “These are dedicated people who want to serve the public.” While there are differences of opinion, he adds, “We’re dealing with mostly good people and I want people to know that, because I don’t think that’s always the perception out there.”

He sums up his overall outlook this way.  “My political philosophy is that we should always be polite to each other; we should be kind to each other, and we should come at problems from our commonalities before we come at problems from our differences. That has served me well in politics and I will continue to do that whether I stay here as Mayor of El Cajon or move on to Washington. That’s how I will live my life.”

Duncan Hunter has been acting erratic for quite awhile now. Time for change, that's for sure. Bill Wells has been a decent job as mayor of El Cajon, so he'll probably get my vote. Assuming non-partisan voters will be allowed to. Good luck Mr. Wells.