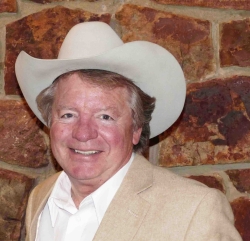 Hear our complete interview by clicking the audio link,  and scroll down for highlights

“My motto is `country over politics,’” says Beauregard, a Ramona rancher,  and formerMarine Corp medic who later helped start a medical clinic to help low-income people.  He’s worked as a cowboy, enjoys hunting and fishing,  and  is  ex-rodeo bull rider who believes  he’s tough enough to take on Hunter and stand up against Washington lobbyists if elected.  ““Once you ride a 2,000 pound bull,” he reflects, “Why in the hell should I be afraid of you?”

Beneath his tough exterior is a compassion heart, however.  Beauregard has some strong ideas on how to reform healthcare, high college costs, immigration and more.

A Democrat  and Bernie Sanders delegate , he also  wants to protect military and veterans’ care.  “The VA should not be privatized,”  says Beauregard, who wants to strengthen, not weaken care for fellow vets.   He also aims to protect healthcare for all Americans.

Hunter has advocated repealing the Affordable Care Act and backed the Republican healthcare alternative. “I do not believe in healthcare as a right,” Hunter stated at his town hall.

By contrast,  Beauregard says, “ I believe in Medicare for all. About 45,000 adults die a year of lack of healthcare. We’ve had people lose their homes, go into bankruptcy because of illness in their family and three-quarters of those had health insurance.”

Of the Republican healthcare plan, which would have taken healthcare coverage away from 24 million Americans and also forced seniors to pay higher rates, he states, “How many mean things can we put in there?”

He notes, “We’re the only country in the industrialized world that does not have public healthcare.”  He notes we could save around $400 billion if we were not paying for profits by healthcare executives.

To pay for Medicare for all,  he would trim the military budget by working to eliminate waste; he recalls bundles of cash that went missing in Iraq as “all waste.”  But he believes we must maintain our military readiness.

He wants to get big money out of politics and work toward a constitutional amendment to overturn the Citizens United decision.   He recalled Reagan and Carter’s presidential campaigns paid for entirely with public financing, unlike today where corporations throw virtually unlimited money into political campaigns.  Hunter has taken large sums of money from special interests ranging from defense contractors to the energy industry.

Beauregard criticizes no-bid contracts as being made “on the blood of our soldiers.”

He supports creation of a Department of  Peace and opposes the Bush doctrine of preemptive war. “We fought the Vietnam War” based on false premises, he recalls, and sees parallels in the first Iraq War when Bush claimed Iraq had weapons of mass destruction. “It was all a lie.”

As a Ramona rancher, he’s seen fellow ranchers hiring undocumented immigrants while supporting Trump’s deportation program as members of the Tea Party,  a stance he views as hypocritical.  He recalls the Braceros program, a legal work program for workers needed here.  He faults Trump for falsely portraying undocumented immigrants as  “all criminals.”  He adds, “I would just do a permit program like the Braceros program….They share the same values as any head of the family would, taking are of their family, but they don’t have them around them. They have to leave them in Mexico….but they spend a lot of their money here. There isn’t one ranch hand that I’ve met, and I’ve met a lot of them, that I wouldn’t have over to my house.”

Beauregard has a biology degree and is critical of Hunter’s denial of climate change despite rapid melting of the Arctic ice.  “We’ve seen in the last 50 years such a spike in global warming compared to any year before,” he says. He doesn’t just talk the talk; he walks the walk.  “I’m a perma culture farmer. I try to release the amount of carbon reduced to the atmosphere.”

Hunter has voted on a bill that would eliminate the Environmental Protection Agency (EPA).  Born in Massachusetts,

Beauregard said he believes cancer that killed his older brother was caused by exposure to water contaminated by a nearby textile mill.

Beauregard got his degree at age 50,  and had to take out a $20,000 loan.  But after a job loss, he found the interest on his loan kept building up until his loan reached $40,000. He did pay it off,  but now believes college must be affordable.

He supports the Sanders plan of making  public colleges free by imposing a tax on Wall Street.   “These banking practices are creating a generation of slaves,” he says of today’s young people saddled with debt and l “legal loan sharking” practices by banks.  Beauregard became active in the Occupy movement  to oppose predatory lending practices by big banks.

Beauregard supports the 2nd Amendment. “I am a gun owner. I’m a hunter.  I belong to Ducks Unlimited and haven’t missed a season for years.”  He does support background checks, however, to avoid sales to the mentally ill, criminals or those on the terrorist watch list. He owns guns ranging from black power to semi-automatic. He would also support limits on sale of certain weapons that can be easily altered into automatic weapons.

On women’s rights he asks, “How long will it take us to pass an equal rights amendment, and  how long until a bunch of men aren’t sitting around making decisions about women’s wombs?”   Having worked in a medical clinic, he recalls the “heartbreaking” situations faced by young girls in difficult pregnancy situations.  “It’s still a horrible decision,” he says of those who chose abortion, because they feel they aren’t able to care for a baby. “This is why we should have a real comprehensive birth control program….I felt the anguish these women would go through.”  He denounced attitudes today that seek to prevent information on birth control, which has resulted in higher rates of sexually transmitted diseases as well as unwanted pregnancies.

A survivor of the 2007 Witch Creek Fire,  Beauregard and his fiancé have built a passive house of noncombustible materials. He wants to see better federal standards for construction in high fire risk areas.  He also cites climate change that’s contributed to drought and bark beetle infestation.

He’s also opposed to  proposed cuts in the U.S. Forest Service budget and wants to see the USFS firefighting efforts fully funded. “Who would say not to that?”  he asks.

Beauregard is one of a crowded pack of candidates running against Hunter, who is under criminal investigation by the Justice Department for spending over $60,000 in campaign funds for personal expenses. Hunter has denied criminal wrongdoing,  though similar cases have recently results in convictions of other members of Congress. The scandal could put the 50th Congressional district in play despite its heavily conservative party registration tilt.

This is the first in a series of interviews by ECM with candidates vying for the seat.

For more information on Pierre "Pete" Beauregard, you can visit www.Beauregard4Congress.com