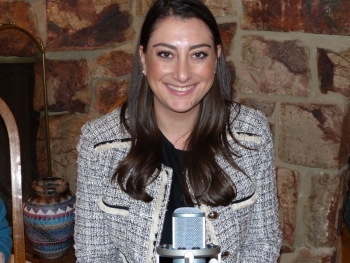 February 27, 2020 (San Diego)—Sara Jacobs is the front runner in a field of 13 candidates running in the 53rd Congressional district, according to a San Diego Union-Tribune poll. She’s a Democrat hoping to fill the vacancy when Congresswoman Susan Davis retires.

She says she’s dedicated her career to building a better, safer world and fighting for the most vulnerable people by making institutions and policies fairer. She’s served at the U.S. State Department, at UNICEF, and the United Nations. She holds a Master of International Affairs degree in international security policy and conflict resolution from Columbia University. She’s Founder and Chair of San Diego for Every Child: The Coalition to End Child Poverty.

Granddaughter of Qualcomm founder Irwin Jacobs, she wants to harness technology to solve big problems and served as founding CEO of Project Connect, a nonprofit that helped map every school in the world with a goal of connecting all to the Internet, a  project now a flagship part of UNICEFs work around the world.

Hear our full interview by clicking the audio link, or scroll down for highlights.

After launching San Diego for Every Child, a countywide child poverty program, Jacobs learned of Susan Davis’ retirement, losing 20 years of seniority for our region.  “I felt it was really important that we have someone who has experience making and implementing policies at the federal level.” With experience in the Obama administration she says she understands how the “levers of power” work.

Committees she hopes to serve on

She wants to service on the House Foreign Affairs Committee, as well as Education and Labor with a focus on early childhood education.

She says there are three key issues she hears from on nearly everyone she meets on the campaign trail. “The first is gun violence. I talk to students who are terrified to go to school every single day, parents who are thinking of homeschooling their kids because they’re worried. Another I hear about especially from young people is climate change and the urgent threat that that poses to us. And lastly, we know families here in San Diego are struggling with the high cost of living and that includes housing, healthcare, childcare, you know here in East County we’ve got El Cajon that has almost half of their population that is living below 200% of the federal poverty rate.”

High healthcare premium costs and copays, as well as prescription drugs are concerns she hears about frequently from families. ”I think healthcare is a human right and we need to be doing everything we can to get to universal coverage. I do support Medicare for All and I would vote for any of the bills in the House…We also need to bring costs down.” That includes cracking down on “bad actors” such as pharmaceutical companies spending more on marketing to consumers than on innovation.  She wants to increase funds for NIH research and grants to invest in research and bring down costs.

Increasing opportunities and fairness for all

She wants to fix “unfairness” in our tax code because by increasing the top marginal tax bracket but make sure capital gains are the same as that high rate, to avoid “prioritizing people who are just investing when we are penalizing people who are working hard every day.” She also wants to close tax loopholes and increase earned income tax credit for families.

She wants to pass climate change legislation and invest in new green jobs as well as blue jobs such as addressing acidification of the ocean and ocean farming, areas where San Diego is well positioned to gain good paying jobs. She also supports the Green New Deal.

She wants to invest in least-harmful green energy projects such as solar and a  decentralized grid. She believes most energy can come from solar, instead of wind that has had some negative impacts on rural communities locally.

She wants Congress to enact legislation to codify Roe v. Wade into law “so that we’re no longer relying on a court system that is increasingly hostile to our rights.”  She supports passing the Equality Act to assure LGBTQ rights and says this is “deeply personal” due to her and her family.  “We need to make sure that every child in America has access to opportunity, who can fulfill their true selves regardless of who they love, or what their sexual orientation or gender identity is.”  The Equality Act passed the House and she says there are enough votes in the Senate, but Senate leader Mitch McConnell has blocked it. She also wants resources to help teachers spot bullying.

She says it is unacceptable for 39,000 military families in San Diego to have to visit food banks.  She wants to take care of the people who are “fighting for us” with quality housing, child care, and help to transition credentials across state lines.

“I’m a millennial.  I’m of the generation that holds about $1.3 trillion in student debt.” She says that means her friends are not buying homes, starting businesses or nonprofit.  She supports free community college and expansion of Pell Grants and how they can be used. “Everybody should the opportunity to go to college debt free,” she says. She supports expansion of loan forgiveness for those going into needed occupations such as nursing or teaching.

“It is going to be my generation and my kids who will be paying off this deficit.” She wants to reverse “harmful” parts of the Republican tax bill to be sure to tax capital gains, close loopholes, and look at investment in affordable childcare which elsewhere has increased revenues by enabling more people to go into the workforce and pay taxes on their income.

She will protect these and says Trump’s budget is the opposite of what is needed.  She faults Trump for cutting money for the State Dept. and foreign aid, when general want more spent on diplomacy around  the world. Domestically everyone who needs food stamps or aid should be able to get it. She wants to protect seniors who need Social Security and Medicare. She would raise the cap on Social Security so at any income level people pay into it. She notes that women who take time out to be caregivers are more apt to be in poverty in their senior years than men.

“In San Diego County we have about 40% of our children who are living below the poverty line which is about 200,000 kids.” She wants to increase the earned income tax credit and refundability of that credit so low-income families get full value, receiving money monthly instead of as a lump fund. She also backs having savings bonds for every baby born to help level the racial wealth gap and create a country where every child has equal opportunity.

She wants to pass a clean Dream Act to give young people here a pathway to citizen; she had a friend who moved to Canada because he couldn’t handle the “stress of uncertainty” here. She wants comprehensive immigration reform, an end to family separations and a humane approach to border security, a secure border that focus more on narco-trafficking and subject Border Control to Dept. of Justice civil rights oversight.

Homeless and the housing shortage

“San Diego actually is the fourth largest homeless population in the country and yet we are only 20th in federal funding from Housing and Urban Development,” she says. She participated in the homeless count in La Mesa in January. She says part of the problem is a funding formula; the federal definition of homelessness doesn’t include those in vehicles or staying on friends’ couches. She would focus too on prevention, such as small grants to cover an electricity bill during an emergency, which is more cost effective than having people become homeless.

She supports a rental tax credit so no one pays over 30% of income on rent. She wants immediate availability for housing if you are eligible for vouchers; right now the wait is eight years. She also wants to develop more housing for low-income families, and fix a low income tax credit that was changed by Republicans.

She believes we have to both provide transit and fix freeway problems in East County. She supports an infrastructure project to fix roads, bridges, and public transportation. She wants to look at expanding rural broadband when we do road work and create microgrids.

She was “horrified” when the Trump administration’s FCC got rid of net neutrality; it should be a “human right” to access information and now private companies decide that.  “I watched those hearings with Mark Zuckerberg being asked those questions by people who clearly had never used Facebook in their lives,” she said, voicing concern over who makes the rules. She wants to be sure not to stifle innovation and supports accessibility.

She notes that the system is unequal for people of color.  “We were able to pass the First Step Act” in a bipartisan way but need to go further, she says. .She wants to use block grants to incentivize states to change behavior, get rid of money bail and private prisons. She supports criminal justice reforms and decriminalizing marijuana use.

She supports provisions to be sure we can respond as quickly as possible by streamlining the emergency response system to be faster. Housing should be fire resistant and also good for energy use reduction, plus the federal government needs to be sure the state gets enough money for fire management, and address water needs as well as climate change.

“ I don’t know a day of my life that we haven’t been at war.” She wants to rebuild diplomacy and alliances to maintain peace and international cooperation. She supports a two-state solution to the Israel-Palestine conflict. She does not support the “one-sided” peace proposal of the Trump administration. In the Mideast.

She believes Trump was wrong to target killing Iranian general Sulemaini and notes repercussions. “Our allies are not supporting us. We’re no longer able to do counter Isis operations and Iran is increasing its nuclear enrichment without any of the checks…We know that troops form San Diego have been stationed overseas as a direct result of that decision. We need a foreign policy that is based on long term how we can make the world more peaceful and make America more safe.” She wants to “end the forever wars” in Iraq and Afghanistan in a responsible way, investing on the civilian way.

On Central America, she says the U.S. should accept people fleeing for their lives and not leave people in Mexico waiting for asylum and vulnerable to violence. She calls it counterproductive for Trump to pull back aid to Central American countries. She cites a plan that improved safety in Central America and an anti-corruption program in Columbia, both of which Trump cut back on.

She wants to overturn Citizens United. “My campaign does not accept any fossil fuel company,” she says, adding that she has raised 75% of her funds form donors of $100 or less, and she has also put some of her own money into the race.

“I think we need to send a new generation of leaders to Congress who are able to respect each other, to listen to each other and reach across the aisle to get things done,” Jacobs says, adding that she would start with areas where there are agreement to build trust.

She is proud of having support in all communities in the district as well as from prominent political leaders across the aisle, plus labor and equality groups.