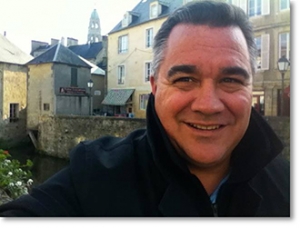 November 28, 2015 (San Diego) – In the wake of the Paris terror attacks and the Syrian refugee crisis, our East County Magazine show on KNSJ radio interviewed Jeffrey McIllwain, PhD, an SDSU professor with special expertise on national security, humanitarian and refugee issues who brings a thoughtful, multi-faceted approach to these complex issues.

Dr. McIllwain is co-founder and former co-director of SDSU’s  graduate program in Homeland Security , serves on the faculty at SDSU’s Weber Honors College, and also teaches emergency management at SDSU’s College of Extended Studies.  He is former director of the International Security & Conflict Resolution program, and coordinator of the graduate program in Criminal Justice and Criminology at SDSU. In addition, he serves as an adjunct faculty member in the Operational Studies department at Joint Special Operations University, the war college for U.S. Special Operations Command (USSOCOM), and a subject-matter expert on the Islamic State for I Marine Expeditionary Force.

He holds a Ph.D. in criminology at Penn State and a graduate certificate in counter-terrorism from An Garda Siochána College in the Republic of Ireland. He has also studied history of mass human migrations after World War I and World War II, and has done master’s and undergraduate work in military and diplomatic history. He also comes from a family of immigrants, bringing a multi-faceted perspective to some of the most important issues facing our nation today.

In Part II of our interview airing next week, Dr. Illwain will discuss emergency management strategies to disasters such as wildfires and flooding, as well as other catastrophic occurrences. His interest in disaster preparedness and response started in his youth, when his family’s home was destroyed and his mother killed by a jetliner crash in their Cerritos neighborhood.

You can learn more about Dr. McIllwain and  his weekend course on emergency management, which is open to the public and teaches you how to be a survivor, not “zombie chum”, at http://www.ces.sdsu.edu/blog/2015/09/survivor-or-zombie-chum-learn-the-difference-in-fascinating-one-unit-weekend-course-introduction-to-emergency-management/.

Dr. McIllwain is completely wrong in saying that the answer to the anti-west acts of aggression by Muslims, a result of wrongful US-led military exercises in the Middle East and North Africa (MENA), is more US military aggression, boots on the ground, and going back into Iraq. .....The reason the US pulled its military out of Iraq is because the new Iraq government, now allied with Iran, thank you very much Uncle Sam, wanted the US out. A US choice to stay was not possible. .... Another result of the wrongful invasion and occupation of Iraq was the formation of ISIS, with its military arm being (as McIllwain states) the disaffected Sunni tribes which were disenfranchised by the US invasion. The US then supported ISIS, and continues to support Sunni ISIS along with its Saudi and Turkish allies BECAUSE it needs to counter the Iran/Iraq/Syria Shia bloc, now predominate in the Middle East, which the US created. .....How about the refugees? Many of them favor the US but many do not, especially the ones whose relatives may have been imprisoned, tortured, injured or killed by the US and its allies plundering MENA. .....Get out, don't get back in.
First of all, Mcillwain did mention that the burden should be shared across the international community. I was in Iraq and 2008-09 and it was extrmely quiet. All Obama had to do was renegotiate a SOFA (Status of Forces Agreement) to maintain a presence to help rebuild and train the Iraqi army, just like we had done in kuwait, South Korea, italy, and Germany. Simply having a troop presence isn't a big deal when there are no longer casualties coming of it. As far as the invasion of Iraq, you neglect to mention that Saddam bribed the international community with the oil-for-food scandal. I challenge you to look up congressional hearings on this and see for yourself how he hooked up France and Russia with cheap oil deals while adding an illegal surcharge to the oil. The pointless UN sanctions and trade embargo on Iraq empowered Saddam to use oil-for-food to bribe members of the UN security counsel for political support to lift the sanctions and abandon support with the US. Then, we went in with at least 2 divisions less than we should have (more troops in the fight makes it safer for those who go. More troops is more support, more supplies, more firepower, more based to evacuate to, etc) and made enemies out of the power syndicates in Iraq that we should have been working with. It wasn't until the troop surge in 2006 that we figured this out. Leaving was a complete blunder, as Iraq and the US learned when isis took mosul, Sinjar, Ramadi, and Fallujah. Thousands of people died who didn't need to die. And the alliances behind Isis weren't caused by the US invasion. If you do deep primary source research on this these are ties that predate world War 2. The religious ideologies begind the version of islam followed by isis goes back centuries.
wrong. . . . In Iraq 2008-2009 there were fewer US military deaths then previous years, but still there were almost 500 US deaths in those two years (icasualties.org)....For nothing....Regarding the SOFA, Obama did try to stay but Iraq (then under Iran direction) demanded the US leave. There was no choice. . . . NO CHOICE BUT TO LEAVE IRAQ. ....The US had laid waste to Iraq, Iraqis suffered tens of thousands of deaths, many at US hands, and Americans weren't wanted there any longer. . . .The purpose of the troop surge in 2007 was to allow reconciliation, which was of no interest to Iran & Iraq. US policy is often not shared by other countries. .. ..Regarding ISIS, it was a US construct in order to combat the new Iran/Iraq/Syria/Hezbollah axis. The US "war" on ISIS has been a phony war for that reason. .. .Russia is fixing that.....Bottom line: More troops in an impossible political situation is never the answer. That's been proven. ...Afghanistan is also going down the tube, for the same reason, by the way. . . .Obama's 70,000 troop "surge" there did no good there, either. . . .Thanks for the response, and Merry Christmas.