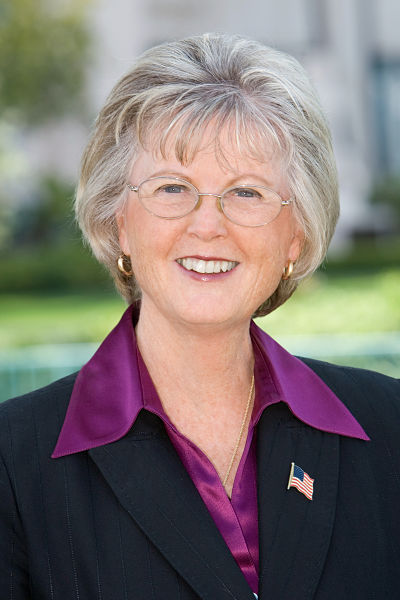 Supervisor Jacob discussed the County’s new regional initiative to tackle the Alzheimer’s epidemic, which has reached epidemic proportions locally.  She also shared details on the County’s Aging Summit coming up on June 12.

Scroll down to read the County’s press release on the Alzheimer’s project spearheaded by Supervisor Jacob, which aims to bring together top researchers to seek a cure, as well as bringing help to caregivers and patients.

The Board of Supervisors, at the urging of Chairwoman Dianne Jacob and Supervisor Dave Roberts, approved the creation of The Alzheimer’s Project, a collaborative effort to address the impact of this deadly disease and to boost local efforts to find a cure.

“Alzheimer’s disease is taking a growing toll on the region, from our homes to our hospitals, and it’s time for a call to arms,” said Jacob. “The Alzheimer’s Project allows us to join forces and take on this epidemic together so no family has to deal with it alone.”

The initiative will bring together health care experts, leaders of the Alzheimer’s Association, world-renown researchers and others to craft a strategy aimed at improving local care and developing a cure.

“We plan to pull everyone together, so that the best and the brightest San Diego has to offer can work in partnership to fight this terrible disease,” said Roberts. “If we can be a catalyst for care, early intervention and seeking new treatments, then we have achieved our goal.”

The death rate from the Alzheimer’s in San Diego County is among the highest in California. More than 60,000 local residents have the disease. That number is expected to double by 2030.

“I lost three close family members -- my mother, an aunt and an uncle -- to Alzheimer’s and it’s absolutely devastating, but I believe this initiative holds the promise of a better future for other families,” said San Diego philanthropist Darlene Shiley, one of the nation’s leading supporters of Alzheimer’s research.

As part of the initiative, researchers from Sanford-Burnham Medical Research Institute, Scripps Research Institute, UC San Diego, Salk Institute and other organizations have agreed to collaborate with county health officials. They will explore ways to boost research funding, increase public involvement in clinical trials and consider other measures linked to finding a treatment or cure.

Clinical neurologists, home care providers and other experts will work with the county to create a public awareness campaign and will develop recommendations to improve services for those with dementia and their caregivers.

“Alzheimer's not only claims lives, but puts incredible emotional, financial and physical strain on those who love and care for them,” said Mary Ball, president and chief executive officer of the local Alzheimer’s Association. “With more than 80 percent of those living with Alzheimer's being cared for at home by a family member, we applaud the county's leadership to identify more resources and support until a cure is found.”

Project participants are expected to bring their recommendations to the Board of Supervisors before the end of this year.

Alzheimer’s claims about 500,000 lives nationwide each year, a figure that is expected to grow as more Americans live into their 80s and 90s.

The epidemic is also taking a high financial toll. The annual nationwide cost of caring for people with Alzheimer’s exceeds $200 billion.

San Diego County government is the region’s lead public health agency. In recent years, the county’s Health & Human Services Agency has stepped up efforts to improve the health and safety of residents through its “Live Well San Diego” initiative.

Chairwoman Jacob announced the idea of creating The Alzheimer’s Project in her State of the County address earlier this year.