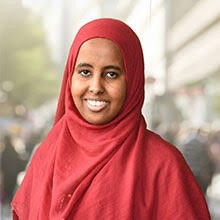 Hear our interview at the audio link and scroll down for highlights.

July 28, 2019 (Lemon Grove) – East Count Magazine sat down last week for an interview with Warsan Artan.  Born in Nairobi, Kenya, after her parents fled civil war in Somalia, she came to Lemon Grove as a refugee at the age of 10. A decade later, she is the lead Youth Organizer at Youth Will, a nonprofit dedicated to making San Diego a world-class region for children and youth. Youth Will recently rolled out a Summer of Youth Power campaign with a series of events to help young people’s voices be heard. 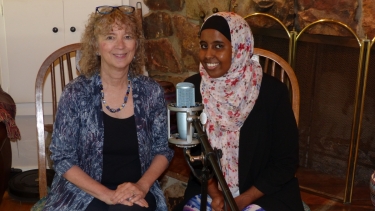 As a young immigrant, she had to learn English quickly to keep up in school and learn the culture as a newcomer to America.  Although it was a trying time, it also gave her strength and perseverance to succeed in starting a new life in America. Later she became involved in student government at San Diego State University, where she became passionate about youth issues.

Today, she works directly with young people of all ethnic and socioeconomic backgrounds to advocate for the things they need—a role that she wish existed when she was growing up in Lemon Grove. Her vision is to make San Diego a world-class region for children and youths across our region.

"They are impacted by the issues that are facing our community, whether that' is the housing crisis, whether that is food insecurity, or how inaccessible our healthcare system is," she says, "and a lot of time they feel that they are not part of that conversation...One of our main goals is to create a youth center environment where you come together...and discuss possible solutions for those problems in order to create and fight for a San Diego where every young person has everything that they need to be happy, healthy and prepared to use their full potential."

Listen to our full interview, originally aired on KNSJ radio, at the audio link.

Learn more about upcoming events for young people at Youth Will. You can follow them on social media at We Are Youth Build on Facebook.

You can also support Youth Will at the organization's upcoming Founder's Dinner on August 15 at Thorn Brewery.