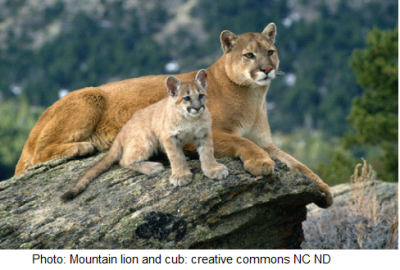 Normally reclusive animals, mountain lions, also known as cougars or pumas, are crossing roads in seeks or mates or prey animals such as deer.  In Los Angeles, a wildlife corridor is planned.  A wildlife corridor under State Route 52 has ben blocked by a fence, preventing passage.  Owens believes wildlife corridors should be required as mitigation for development. 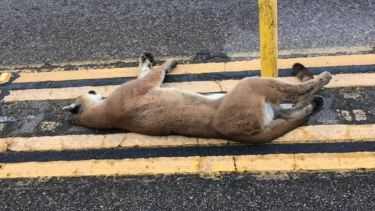 After this interview, ECM learned that plans are under consideration in San Diego County for a possible wildlife tunnel under State Route 67, where mountain lions have been killed by vehicles. (Photo, right:  lion killed on State Route 67 in September.)

When a top predator such as a mountain lion is removed, the ecosystem suffers, since prey animals may become overpopulated.  On the East Coast, decimating mountain lions has led to an increase in deer and an increase in diseases carried by deer ticks, including Lyme disease. Mountain lions prefer deer or elk, but will also eat prey ranging from rabbits to coyotes, as well as pets. One hungry mountain lion in Los Angeles hopped a fence into the L.A. Zoo and feasted on a koala.

Owens encourages farmers and ranchers to choose options other than predation permits to protect sheep, goats, cattle and other livestock.  Keeping livestock in a covered enclosure and pets indoors overnight is the best protection. Other options include certain species of dogs to protect herds or hazing with lights or noises.

A new law prohibits seeking a predation permit in some parts of California unless you have first tried hazing.  One study found playing recordings of the human voice, from Rush Limbaugh ranting to poetry being read aloud.

Climate change and wildfires are also taking their toll on mountain lions and their habitat.

Mountain lion attacks on humans are rare, with just 20 fatal attacks in the past 100 years in all of North America.  To be safe, use caution in mountain lion territory, such as hiking with a friend, carrying a walking stick and pepper spray or bear spray. If you do see a lion that seems aggressive, don’t roll up in a ball as you should with a bear. Instead, make yourself look as large as possible, raising your arms or holding out a coat, and make noise to frighten off the lion.

If you’ve never heard a mountain lion, you might be surprised to learn that a mountain lion can make sounds similar to a bird chirping or a woman screaming, a far cry from the roar made by African lions. Hear some mountain lion calls on our show, which can be accessed at the audio link to our show.

Wild Zone Conservation is a local nonprofit that conducts citizens’ science projects and research. Their experts are available to speak to organizations on a variety of topics. “We’d love to come talk to you about wildlife,” Owens says.

Learn more about how you can help protect mountain lions at http://wildzoneconservation.org/  and https://www.mountainlion.org/.