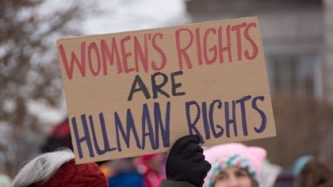 July 19, 2022 (San Diego’s East County) -- Bonnie Burns Price and Bella Barna, two East County residents and long-time women’s advocates, speak out on their efforts to help women get abortions before and after Roe vs. Wade legalized abortion access across America.

In an interview aired on the East County Magazine Show on KNSJ radio, they also shared their concerns over how the Supreme Court’s reversal of Roe vs. Wade will impact vulnerable women.

In addition, Barna shared her personal experiences with an abortion and a failed miscarriage which put her life in jeopardy.

Price was a college professor in Pennsylvania before Roe vs. Wade. She said abortions, though legal in the state, were very costly with a contorted process to access them.  “If you wanted a safe, legal abortion you had to go to a hospital that allowed it and had two MDs and one psychologist who would sign a document that the woman with an unwanted pregnancy would suffer irreparable mental or life threatening issues. That cost $800 in the late ‘60s and early ‘70s, before Roe. College students found that money to be extremely prohibitive.  Many went to backroom butchers, untrained, to do their abortions.”

So Price helped students in her classes to access abortions, at times in another state.

She later became a member of Planned Parenthood. “Our clinic had to give shelter to a young doctor who was running for his life” due to “the anger of people who were against abortion,” mainly Catholics “who tried to force their religion onto others…”  The doctor told her, “Someone has to do it, and I want to be sure women have the proper care.”

Barna, a nurse, has worked for both Kaiser Permanente and Planned Parenthood.  She served in a n operating room and clinic in Los Angeles after Roe vs. Wade. “It was a much safer situation.”

“I can’t imagine the amount of sadness I have for all these young women who have no options,” she says of the current situation. “It’s absolutely horrible.”

A woman on Barna’s Facebook page told of a mother who tried to induce abortion with a wire, but it failed, so her father took her to a hotel room where a doctor performed an illegal abortion, a far more terrifying experience.

Today, there are abortion pills and morning after pills, which the Biden administration has said must remain legal. But Barna notes, “If a woman has any complications…she’d be in fear of arrest if she goes to a doctor for help.”

Price voiced horror over the nightmare facing a 10-year-old girl in Ohio this month who went out of state for an abortion. She says childbirth or pregnancy at such a young age can cause death, and that people have “no idea that they are causing the death” of young girls by banning abortions even for children who are victims of rape or incest.

ECM editor Miriam Raftery recalled a similar case she encountered in her career, of a Southern court that refused to allow a child raped by a family member to obtain an abortion.

Barna also cited the dangers of ectopic pregnancies, in which a woman can die if an abortion isn’t done to end a pregnancy where the egg has implanted in the tube.  Raftery recalled a coworker whose life was threatened by an ectopic pregnancy and noted that one in every 50 to 100 pregnancies are tubal, one of many conditions that can threaten a mother’s life during pregnancy such as pre-eclampsia or gestational diabetes.

An abortion ban can also put women at risk who have incomplete miscarriages; actress Debbie Reynolds was forced to carry a pregnancy to term for weeks after a baby died, causing toxins that harmed her health.

Barna recalled that the same thing happened to her, with another pregnancy where the baby died but the fetus didn’t expel and she was forced to carry it to term.

Lack of abortion access can make it harder to leave an abusive situation.  And as Burns noted that when guns are in the house, if a partner doesn’t want a baby and abortion isn’t available, “he is more likely to murder the woman.”

Raftery spoke of a murder in San Diego in the 1920s of a pregnant woman found on a beach at a time when murder of pregnant women was common.

Californians will be able to vote on a constitutional amendment to assure abortion stays legal in California despite any future state legislative action. But Republicans in Congress want to ban abortion nationwide if they gain a Congressional majority in the future.

Burns advice to women is “taking political action” given the current Supreme Court and high risk of Congressional action to outlaw abortion. She notes that abortion is legal in Canada and Mexico, which could force women to leave the country for abortions if it becomes illegal here – an option that may not be available to women or girls without passports.

Barna notes that first-trimester abortions are safer and less traumatic to women and doctors.

Justice Clarence Thomas wrote that he does not believe there is a right to privacy in the Constitution and wants the court to reconsider decisions that legalized gay rights, gay marriage, and birth control for married couples.  “It’s absolutely insane,” Barna said, noting this would take away the ability to stop unwanted pregnancies.

Burns said, “We have privacy rights for healthcare records” and other areas.

Congress could legislation a federal privacy right as well as reproductive rights.  House Democrats did, in fact, pass a bill to protect reproductive rights, but there are not enough votes in the Senate for it to pass due to Republican opposition.

Barna, who has also worked in psychiatry, says she is very concerned that women seeking abortion needs access to mental health counseling, “But if a woman discloses she has had an abortion, that counselors would somehow have to report that” would have a chilling effect. “It’s like going back to the 15th Century.”

Price observes, “The whole situation is fraught with ignorance,” noting that some religious organizations are “very strongly blaming women for everything. So we have a big problem with the patriarchy.” She notes the decision overturning Roe cites a legal scholar who believed women should be burned if found to be witches.

She also voiced anger over four justices who testified during Senate confirmation hearings that they believed Roe v. Wade was settled law.  But there aren’t enough votes currently to impeach justices for perjury.

Barna said, “When you look around the world and see how backward we are…we’re exceptionally stupid we are on this issue.” She noted that polls repeatedly show the majority of Americans support legal access to abortion, and reiterated the need for mental health services.

San Diego’s Congressional representatives include four who are pro-choice and one, Darrell Issa, who signed a brief asking the Supreme Court to overturn Roe vs. Wade and praised the court’s decision.  His opponent, nurse Stephen Houlahan, is pro-choice.

“The most important things for people to do is follow up. Learn who supports women and support candidates who support women” including the right to abortion and to control her abortion, says Price.  “Name one law that our government makes to control a man’s body? Women are relegated to the position of being without control of their own bodies, which legally is called loss of agency, and we need to have that restored.”  She called for  Passage of the Equal Rights Amendment.