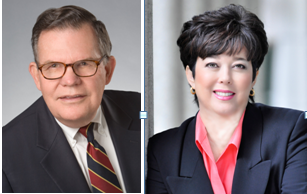 May 22, 2014 (San Diego)—San Diego County’s Assessor/Recorder/Clerk is responsible for deciding whether or not you can reassess your property to lower your taxes.   The job also includes marrying couples and providing public records such as marriage, birth and death certificates.  This week, East County Magazine interviewed incumbent Ernest Dronenburg and challenger Susan Guinn , a consumer advocate/attorney, during our show on KNSJ.

Dronenberg, former Chairman of the state Board of Equalization and the Franchise Tax Board, defends his record and says his office has high customer satisfaction ratings.

Guinn contends San Diego County has among the worst rates in the state for unresolved property tax assessment appeals.  She also faults Dronenburg for filing a challenge seeking to avoid conducting gay marriages after Prop 8 was ruled unconstitutional.

He says his Prop 8 challenge was based merely on procedural questions, though a “Dump Dronenburg” site was launched by advocates of same-sex marriages at the time.  He later launched a “walk-in Wednesdays” program to expedite marriages for both gay and straight couples.

Guinn says she wants to start public outreach events to bring information out to communities.

Dronenburg touts his department waiving fees for wildfire survivors, with support from Supervisors, as an example of his efforts to help the public.

The incumbent says fee hikes were needed to cover rising costs, since some fees hadn’t been raised in years. Guinn contends that fees were raised far more than needed to cover costs, leaving the public footing higher bills without improvements in service.

Guinn, who previously led efforts to win a $3.3 billion settlement from big tobacco companies for the county, says she will be a watchdog for consumers if elected.

To learn more about the candidates, visit their websites:

The office of San Diego County Assessor is very different from other elected positions. First, the Assessor’s office is responsible for providing services to all of San Diego County. This includes 18 incorporated cities and all of the unincorporated communities. All registered voters in San Diego County can vote for the San Diego County Assessor. Ther Assessor is responsible for managing 981,000 properties, a $400 billion tax roll, a $55 million budget, 400 employees, and 5 branch offices. Secondly, the duties that the Assessor's office performs are technical in nature. California voters and our State Legislature have established guidelines that the Assessor’s office must follow. This is why it is vitally important to elect a candidate with experience in real property appraisal and property tax assessment. Not only is Dronenburg the current Assessor/Recorder/County Clerk, but previously he served 20 years on the California Board of Equalization ("BOE"). It is the BOE that governs the activities of the County Assessor's office. Dronenburg truly believes in his responsibility to local taxpayers and not only follows the laws of California, but goes above and behind. An example of this is that his office proactively reduced assessments during the downturn of the real estate market. On June 3rd, please cast your vote for Experience, Advocacy, and Fiscal Responsibility. Vote Dronenburg for Assessor.