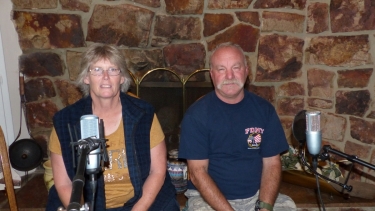 "Since the inception of the San Diego County Fire Department in 2008, this county has lost over 400 volunteer firefighters, boots on the ground that were guarding their homefront...That's sad." -- JCFPD Battalion Chief Mike Van Bibber

“Ranchita in the month of June this year was covered six days. That’s all.” – Karen Kiefer, JCFPD firefighter-paramedic, on services after the County Fire Authority began its takeover of the volunteer department  June 1st.

"They came and found us...it was dark, the embers were everywhere...the roof was on fire," Lori Foss says of JCFPD volunteer firefighters who saved her life and her home during the 2007 Witch Fire

October 11, 2018 (Julian) – The battle to save the Julian-Cuyamaca Fire Protection District, the last volunteer fire district in San Diego County, has reached a heated pitch. Residents are gathering signatures seeking to block the takeover by the County Fire Authority approved by the Local Agency Formation Commission in September, before an October 16th public protest meeting with LAFCO.

On our radio show on KNSJ, East County Magazine interviewed the JCFPD battalion Chief Mike Van Bibber, along with firefighter-paramedic and former emergency medical services director Karen Kiefer, a well as Lori Foss, who lost her home in the 2003 Cedar Fire and had her home and family saved in the 2007 Witch Creek Fire by Julian’s volunteer firefighters. They believe that the takeover will leave Julian and surrounding areas less safe due to longer response times by engines coming from farther away, with no “home team” to respond quickly to medical emergencies, car accidents or structure fires.  Click the audio link to hear the full interview, or scroll down to read highlights.

That may seem like a high bar, but Van Bibber says over 80% voted to create the district, and community opposition is strong.  Some 40 residents drove from the Julian area to San Diego to speak out against the takeover at the LAFCO meeting last month, with only two speaking in favor.

Julian residents will also be voting on Proposition QQ on the November ballot, which would increase the fire fee from $50 to $200 a year to fund the volunteer fire department, if the district remains independent.

The County contends that consolidating rural fire districts under the new County Fire Authority will make areas safer with better staffing and professionally trained firefighters. In some places where takeovers have occurred and service was spotty under the volunteer system, area residents say fire service has improved, such as in Jamul.

But the JCFD serves a mountain area that includes remote towns – and Kiefer says many of those are being left uncovered since the County began its takeover of the JCFD in June.

“The concern I’m seeing is standard of cover,” she says. “The county will move engines around to higher population areas, so each community is ranked by population density, roads, and businseses…lower ranking communities will be last on that list and sometimes they will be virtually left uncovered” for structure protection, emergency medical needs and traffic collisions, she says. “It’s already happening.”

Ranchita, De Luz and San Pasqual are all reserve stations, not county stations, she explains. They might have a patrol and a water tender, or no coverage at all. “Ranchita in the month of June this year was covered six days. That’s all.”  So for 24 days in June, there was no one manning the fire station at all.

Chief Van Bibber says that during several wildland fires this summer, resources were “spread thin” adding “Our engine from Julian, the County Cal Fire engine, went on several occasions off the mountain to assist in that suppression effort. The down side is it left Julian and Cuyamaca uncovered for an extended period of time. That’s where the JCFPD volunteer department is important. We’re the home team. We don’t leave. We stay and we cover when others are gone. It’s been that way for 35 years.” He says Cal Fire and the JCFPD had a great working relationship, helping each other in the past, and that the volunteers made a significant difference.

He brought  a list of examples where he says Cal Fire coverage alone proved inadequate – a house that burned to the ground in Shelter Valley while Cal Fire was out of the area, a Ranchita resident who watched a neighbor’s house burn down while a Cal fire crew reportedly got lost on a  backcountry road, a mother who nearly died in Pine Hills when another crew got lost, and an air medical evacuation call cancelled for a child at Camp Marston due to a crew unable to find the remote site; Cal Fire has denied the latter incident.

Lori Foss knows firsthand the importance of having volunteer firefighters on hand around the clock. During the 2003 Cedar Fire, she recalls, “There was a backfire that Cal Fire lit that burned my home and 150 others.”  She nearly lost another home in Julian in the 2007 Wtich Fire.  Home alone with her daughter during high winds when electricity and cell phone service were out, she says a teacher noticed her daughter wasn’t in school and notified volunteer firefighters.

“They came and found us. It was almost 6:00 at night in October and it was dark. The embers were everywhere. A tree had fallen on the horse trailer.”  The volunteer firefighters helped her tie the horses to a minivan and escape, along with her daughter, several dogs and cats.  “The roof was on fire,” says Foss.  “We didn’t know which way to go. The embers were flying everywhere.” She says captain with the JCPD volunteers “came with a water truck and shone a light on us. If not for the light and the water tender behind us, we would not have made it.” Volunteers also fought the fire and saved her house from the fire.

Kiefer brought data showing that when Cal Fire provided the County with historical response times, some incidents were left off including at least six calls from April to June when Cal fire took 25 to 30 minutes to arrive at calls in Julian, including three calls along the heavily traveled Highway 78.

“If you’re having a cardiac arrest or you’re bleeding to death, minutes count,” says Kiefer. “Within five to six minutes you can have brain death without oxygen.”

She is concerned for tourists visiting Julian as well as for residents throughout the district , due to county fire engines being moved to higher populated areas, such as Witch Creek’s engine equipped with extraction gear moved into Ramona.  “That’s leaving the entire 16 mile corridor along Highway 78 from the outskirst of Ramona all the way to Santa Ysabel” uncovered, she states.

A couple of months ago, a vehicle hit a tree in Santa Ysabel, yet “due to politics, Santa Ysabel was not allowed to respond off the reservation,” she says.  So the closest resource to respond was a county engine in Ramona.

Van Bibber notes that if the JCFPD is dissolved, the County will be reliant on its own system and nobody else.  So places like Shelter Valley will have a 25-30 minute response time. Ramona to Julian could be a half hour response time as well. Taxpayers in the district are having lives put at risk, the fire chief argues. “We deserve the same thing as anybody else.”

If residents are successful in saving their district from being dissolved, they will also be voting in November for three candidates running for the JCFPD board. Currently the board majority favors dissolving the district. The candidates running are Mike Menghini, Patricia Landis and Eva Hatch.  “All three have stated they want to be supportive of the JCFPD,” Van Bibber says.

He tells the story of an Army veteran who likened the JFFPD to the “National Guard of Julian”, the weekend warrirors who protect a place when professionals are deployed elsewhere. “We’re there to stand at the homefront when problems arise,” Van Bibber concludes.

He shares a troubling fact for residents countywide. “Since the inception of the San Diego County Fire Department in 2008, this county has lost over 400 volunteer firefighters, boots on the ground that were guarding their homefront…That’s sad,” he reflects. “There are more wildfires; it’s more intense. They’re bigger. Call it global warming, call it what you want…We need more firefighters, not less.” If Julian-Cuyamaca’s volunteer fire department is dismantled, he adds, “This county is going to lose another 50 firefighters that are trained to go and help in a time of need.”

The chief says all firefighters are valuable no matter what uniform they wear. “It’s the willingness and our abilities to serve our fellow man…no one department can stand alone and do it all,” he says, adding that it takes a team approach.

Kiefer says she’s been honored to work with the “amazing young men and women” in their volunteer department, noting that volunteers often have had professional training and some have gone on to careers in major fire departments.

Foss notes that Cal Fire’s mission is to fight wildfires, while the JCFPD has a mission to battle structure fires and provide aid during medical and vehicle emergencies. “We need both in Julian,” she says.  While voicing appreciating for Cal Fire’s boots on the ground firefighters, she says, “we want our independent Julian Fire station.”

Bibber encourages people countywide to contact their county supervisors, because losing volunteer firefighters affects all of the unincorporated areas.  “The voice of the people will be heard, and that’s important to know, that the democracy of our country is built on that very thing,” he concludes.