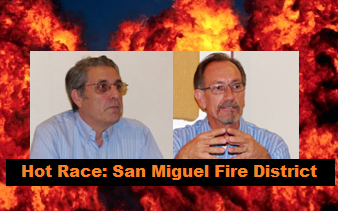 November 4, 2016 (San Diego’s East County) – The future of the San Miguel Fire District hangs in the balance.  Should San Miguel keep its contract with Cal-Fire or return to being a stand-alone district, as the current board recently voted by a slim margin?  We interviewed a representative from  each of the two slates running for our East County Magazine Radio Show on KNSJ. Listen now by clicking the orange audio link.

In this heated session,  incumbent Bill  Kiel, a retired engineer, makes the case for staying with Cal-Fire, while retired fire chief Kim Raddatz argues for giving Cal-Fire the boot and returning to an independent district.  Each side claims their position will be best for taxpayers and public safety.  One side is backed by Cal-Fire firefighters, the other by leaders of the former San Miguel firefighters.

The four candidates who want to stay with Cal-Fire are  Rick Augustine,  Bill Kiel, , Jeff Nelson, and Dave Rickards.  Read more of their arguments at this site,  paid for by Cal Fire firefighters local  2881:http://www.yourfirefighterssupport.com/

The four candidates who want to axe the contract with Cal-Fire and return to a free-standing district are Charlie Cleaves,  Everett Evleth,  Karrie Johnston, and Kim Raddatz. Read more of their arguments at their Facebook  page:  https://www.facebook.com/Citizens-of-San-Miguel-544985889006596/

Read more about the four candidates who want to return to a free-standing district, backed for former  San Miguel firefighters and residents: https://www.facebook.com/Citizens-of-San-Miguel-544985889006596/

There is also a ninth candidate in the race, Randy Dibb,  who says he hasn’t yet made up his mind on the burning issue inthis race.

See our coverage of a candidate forum at which all nine candidates  appeared and spoke out at http://www.eastcountymagazine.org/dueling-slates-vie-san-miguel-fire-board-all-9-candidates-speak-out-heated-candidate-forum-crest.

Former State employee is proving to be quite the spokesperson for the State of California. Angry birds should not be serving in any public capacity. Clueless. Not worth another keystroke.