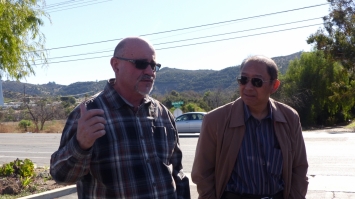 San Diego’s General Plan took 13 years and $18.6 million to develop with locally-developed plans for accommodating growth at the local level.  But the switch to a shopping center would drive up traffic, air pollution and greenhouse gas emissions, according to CNFF.

“We’ve got a housing shortage and you’re going to lose 160 units to a shopping center that we don’t need,” says Joe Brunetto, owner of Marechiaro’s Italian Restaurant across the street from the proposed project.

“In 2005 we battled them,” he told media at a press conference this morning, adding that South Coast Development withdrew a controversial development plan under condition that neighbors agreed not to protest a condominium project on the site. “Then in 2014, they said we only build shopping centers,” he says. “It’s really disappointing that they didn’t keep their word.”

Keith Gregory of Southcoast Development told ECM news partner 10 News that he couldn't get a housing developer interested in building homes because of freeway noise.

What also changed was property value.  In 1998, the developer paid inflated values for the land of three to four times its value, according to Brunetto. But today it’s value has fallen, so the company seeks to build a more lucrative commercial project that could potentially be sold for more.

Brunetto, whose business is 62 years old, says he’s not afraid of competition and already competes against four nearby Italian businesses. But he’s concerned about increased traffic and more difficult access to his property. He calls the switch in project types after he and others withdrew opposition “unfair.”  He adds that the area doesn’t need more retail, since there are many vacancies in retail centers near a Walmart just one freeway exit away, off Los Coches Road.

The project calls for development on nine acres of the 13-acre site that’s currently undeveloped.  According to documents submitted by the developer to the county, goals of the projecting including enhancing economic development of the area by developing a new commercial center compatable with the character of the Lakeside community that will serve retail shopping needs of the southwest corner of the Lakeside Community Plan area from Blossom Valley to Lake Jennings Park Road.

The center, if approved, would include a grocery store, bank, restaurant, two multi-tenant retail buildings, a gas station and a car wash.  There would also be an open space easement for a wetlands buffer along Los Coches Creek and trails for pedestrians and equestrians.

Lakeside’s Community Planning Group recommended against the shopping center proposal, but the County’s Planning Director has recommended that Supervisors approve it at Wednesday’s meeting, which is the first item on the 9 a.m. meeting at the County Administration Building downtown.

Jack Shu, president of CNFF, says it is “ridiculous for supervisors to spend $18 million on a general plan, with compromises” and then “each time a developer comes in with a proposal to change it, they allow it to happen.”

He wants to see the site developed to hold up to 160 multi-family homes, as the General Plan now allows.

CNFF promotes housing infill in urban and suburban areas, not sprawl east of Alpine that would impinge on the national forest, like some other projects that have been proposed or built.

“Our trees are dying. We lost one million trees during the drought, due to poor county planning,” Shu says, noting that commercial development is responsible for more greenhouse gasses than housing due to increased traffic. Moreover, housing projects in very rural areas of East County puts more traffic onto freeways, further exacerbating climate change in areas that lack mass transit.

“We’re not against development. It’s about sound housing,” he concludes.  ““We have a housing shortage.  Let’s put housing where it belongs.”