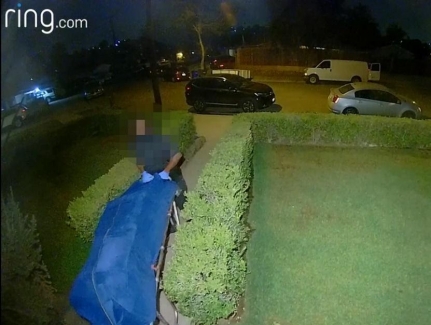 At least five others were victimized in a series of brazen thefts. Authorities seek more victims
By Miriam Raftery
October 27, 2020 (Spring Valley) – Sammy Willie Gates, the owner of Mortuary Transportation Services, has been arrested for stealing property from the home of a deceased man, smuggling some stolen goods out in a body bag.
On August 31, Sheriff’s deputies conducted a welfare check at a home in Spring Valley and found the body of a man, 60, who died of natural causes. The body was transported to a mortuary by a contracted independent mortuary service.
Three days later, on September 2, the victim’s family called to report items missing from the home, including a firearm and a safe.  On September 4, after reviewing surveillance video, they discovered the home had been burglarized.
Mortuary Transportation Services was not the company that transported the body of the deceased and authorities have not disclosed how the suspect may have learned of the victim’s death.
Surveillance video from a Ring doorbell camera shows a man authorities believe is Gates arriving in a white utility van, then entering the home. He exits with two bags filled with stolen property, then returns to the home with a gurney and an empty body bag. He then emerges with a body bag filled with stolen property on the gurney.
On September 9, detectives from the Rancho San Diego Sheriff's station served a search warrant at Gates’ residence in unincorporated El Cajon.
“The victim's safe and firearm were recovered as well as 16 additional firearms, many believed to be war relics dating back to the early 1900s.” says Sergeant Karen Bloch. Two additional safes, multiple personal identifying documents, jewelry, watches, war medals, comic books and several thousand dollars in collectable coins were also recovered from Gates' residence. A gurney and body bags matching the surveillance video at the victim's residence were recovered from Gates' white utility van.
Later that day, Gates was arrested for residential burglary and being a felon in possession of a firearm.
“Since his arrest, detectives have identified five additional victims,” says Sgt. Bloch.
If you have additional information regarding this investigation, or believe you have knowledge of additional victims, please contact Detective Dalton at (619) 660-7037. Call Crime Stoppers at (888) 580-8477 with information and you will remain anonymous. You can also download the P3 anonymous tip app at sdcrimestoppers.org. You may be eligible for up to a $1,000 reward for information that leads to an arrest.