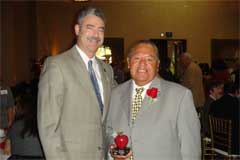 By Miriam Raftery and Leon Thompson

Photo: Charlie Brown, right, honored as a Healthcare Hero in 2009 for his work with the Burn Institute

November 14, 2014 (Alpine) – It takes courage to jump out of an airplane into a raging forest fire—and a big heart to work on behalf of burn victims and other charitable causes.  Kumeyaay elder Charlie Brown has done all of these things and more.  He’s been honored as a Healthcare Hero, nominated by the Burn Institute. He's also lived through tumultous changes that swept across Native American reservations in East County as a result of tribal gaming.

This month, he sat down with East County Magazine Tribal Beat reporter Leon Thompson for an exclusive interview, reflecting on his career as a U.S. Forest Service hot shot, his philanthropic efforts, and the dramatic changes that the Kumeyaay nation in San Diego County has seen as a result of Indian gaming.

Do you have an email or phone number for Elder Charlie Brown, or for author Leon Thompson?