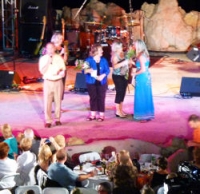 September 13, 2012 (La Mesa) -- East County’s most recognizable landmark, the memorial cross and historic amphitheater atop Mt.Helix, will be the site of the Fifth Annual HeART of Mt. Helix. The event will be held on September 15 from 5:30 pm to 10:00 pm and will feature vignettes by local performing and visual artists.
Providing dancing under the stars is the CoastRiders, a local band made up of musicians who have played with Jimmy Buffett, Gary Puckett and the Union Gap Band, and other international performers. Other musicians include Robin Young performing Patsy Cline and a wide variety of local talent on multiple small stages. Mt. Helix watercolorist Chuck McPherson, Brutalist Sculptor Frank Coda and Wood Turner Sally Ault will each be demonstrating their technique to showcase the variety of visual arts talent in East County.
Local restaurants will be providing culinary treats which are all included in the event price - Anthony's, Apothic Catering, Auntie M's Cup n’ Cakery, BMH Italian, Grove Pastry Shop, Hacienda Casa Blanca, Gingham (the new restaurant in La Mesa by “Top chef” Brian Malarkey), Hooley's, Riviera Supper Club, Rubio’s and Terra American Bistro. Starbuck’s will be doing a coffee tasting by country. 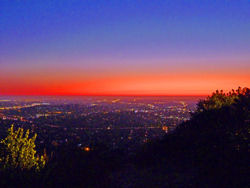 The event will also include a selection of wines and artisan beer from Ballast Point Brewery. Alchemy Restaurant’s mixology team has even created a signature cocktail for the evening called Old Grove Melonade. Cal Walker, Clear Channel Traffic reporter, will serve as Emcee. A variety of interesting auction items will be available including a 10-day cruise for two on Holland America Lines. Proceeds from the event will be used to preserve and enhance Mt. Helix Park and Amphitheater which receives no government funding yet is open to the public daily.
Tickets are $50 for general admission and $100 for reserved table seating and are presale only with prices going up September 1. They can be purchased online at www.mthelixpark.org or by calling 619-741-4363. The event is expected to sell out.