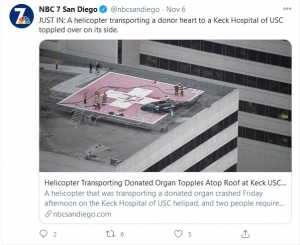 November 10, 2020 (La Mesa) – A medical helicopter from Sharp Grossmont Hospital in La Mesa crash-landed onto the top of the University of Southern California’s Keck Hospital in Los Angeles Friday, but its precious cargo was saved.  A heart being delivered via a Helinet Aviation Services' helicopter has been successfully transplanted into the patient, who is doing well.

“It’s actually an amazing story,” Keck Hospital spokesperson Meg Aldrich told the Los Angeles Times. The pilot and two passengers aboard the helicopter were treated locally for minor injuries. Nobody on the ground or in the hospital was injured and patient care was not disrupted, according to a statement by Keck.

NBC San Diego reports the helicopter flipped onto its side after the hard landing. Three people on board survived, though the pilot had minor injuries, according to the hospital.

“We are fully cooperating with the NTSB and FAA on their investigations,” a Helinet statement from COO and President Sean M. Cross indicates. “Our company prides itself on professional operation and maintenance of aircraft as core values - the safety of our customers and pilots is always our top priority. We are happy that at this time there appear to have been no serious injuries.”

The FAA and National Transportation Safety Board are investigating the crash.

Besides surviving a crash landing, the heart was also dropped by a medical worker who tripped over debris.

The incident made news internationally, including reports in the BBC.