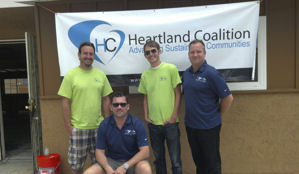 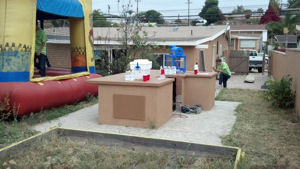 sweet hydration was stationed nearby. Heartland Sustainable Housing posters and its banner decorated the front windows and eave. 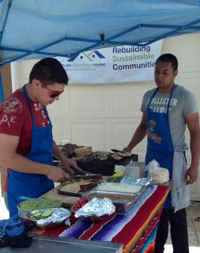 A Mexican food caterer’s canopy along with all the accoutrements for grilling carne and pollo appeared in the driveway. By noon, the flavorful aroma of “street tacos” permeated the air.
Most noticeable was the purposeful activity of the many people wearing neon green t-shirts, who arrived in a steady stream early in the morning starting with Jim Griffin, the HSH staffer who oversaw the set up of the backyard entertainment zone for kids.
Others came in hats and forming a neon green platoon, went to work with hoe, rake, weed eater, and chain saw to spend hours of edging, pruning and hauling away cuttings to a large flat bed truck parked adjacent to the property. Members of the platoon also scouted the block and later carried scrap wood from the backyard of a neighbor at the end of the block to be united with some tree and branch trimmings in the flat bed truck that had already made one trip to the landfill. 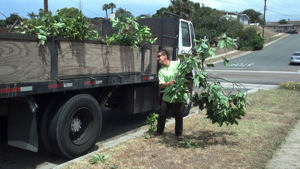 Earlier in the week, Heartland housing counselor Gabriel Serrano canvassed the neighborhood with 125 flyers announcing that volunteers would be coming to provide free help with such things as removing large items and unwanted brush from their premises. Serrano informed neighbors that they could even sign up to receive quick curbside fixes from a general contractor.
The flyer beckoned neighbors to sign up for yard help or join the party as volunteers. All attending would have the opportunity to visit with on-site sustainability and housing advisors, receive homeowner, financial, and property preservation information, and eat free food.
Many occupants were not home, but Serrano was able to talk to a few residents and was met with mixed responses. Some were receptive but guarded as if to say, “Really?”
As Serrano, whose background is real estate, explained, “You have to understand, people are apprehensive about something billed as free. Heartland’s name has to get out there so they know that we’re here to help them. Right now it’s an invitation for food and information.” Serrano is encouraged. “We’re trying to do the right thing and I hope that’s the message people finally get.” 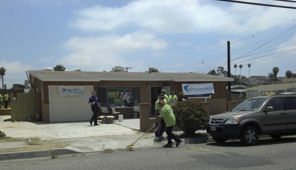 HSH, a division of Heartland Coalition, 501(c)(3), works with private and institutional partners to provide viable purchase opportunities to low to moderate-income homebuyers. The HSH brand is “Rebuilding Sustainable Communities.” Six weeks ago, HSH purchased the dwelling at the southeast corner of East Oxford Street and Judson Way.
Alan Cassell, Director of Acquisition and Asset Management, put it this way. “Our mission is to improve and resell homes to first time and low income buyers. Heartland bought the property from the bank in such sub-standard condition that it was considered not saleable. Having assumed all liabilities for code violations, we will bring it back to code with the net effect of revitalizing and stabilizing the asset and enhancing the property value. This improves the neighborhood.” 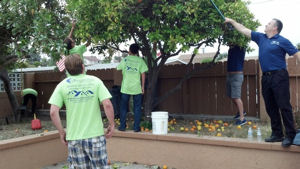 Cassell noted that the next door neighbor is excited because he was helped when HSH rebuilt their common fence at no expense to the neighbor. As a result, he is very supportive.
“The hardest part,” Cassell reflected, “is getting people to say yes to coming on their property to haul away debris and pull weeds, etc.” Adding that HSH had rehabilitated another residence seven blocks away, Cassell revealed, “Our next project is a large property in Escondido that closes escrow in July.”