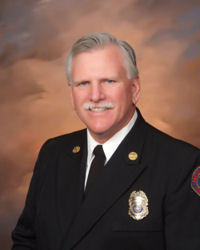 July 27, 2012 (San Diego's East County) -- The Fire Chief for Heartland Fire & Rescue in El Cajon, La Mesa and Lemon Grove, Mike Scott has announced his retirement. His final day will be July 29, 2012. He had been the Fire Chief for the City of El Cajon since June of 2005, and became the Heartland Fire Chief, overseeing the three cities, in October of 2009.
Chief Scott began his career with the department in 1984 as a Firefighter/Paramedic. During his 28 years with the City, Mike was one of the original California Task Force-8 Urban Search and Rescue team members in California. He started as a Technical Rescue Specialist and deployed to the Northridge Earthquake in 1994, and to the Atlanta Olympics bombing in 1996. 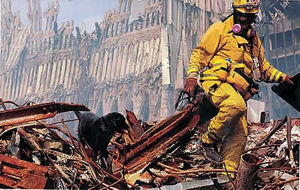 Mike transferred to the Canine Division where he was partnered with “Billy”, a devoted Black Labrador, in November of 1998. Mike and Billy became the second Canine Search team in the county ever to be certified by FEMA. They served several local missions before being deployed to Ground Zero shortly after the 9/11 terrorist attacks in New York.
In October of 2009 the City Managers of El Cajon, La Mesa and Lemon Grove announced the appointment of Fire Chief Mike Scott to oversee the operations of the cooperative management services for the three departments when they merged on January 1, 2010. The Joint Powers Agreement created a single management team to oversee the day-to-day operations of the three fire departments. These efforts were recognized by the Taxpayers Association when Chief Scott accepted the Golden Watchdog in May of 2010.
Chief Scott said following his announcement, "I have been deeply honored to serve as the fire chief for the Heartland Fire & Rescue Joint Powers Agreement. We have built a solid organizational foundation, and I am confident that this effort will continue to succeed. It has been my privilege to serve the community, the elected officials, the city managers and the dedicated employees of our fire department."

El Cajon City Manager Douglas Williford said, “Mike has been an exemplary Fire Chief and deserves a lot of the credit for the success of the consolidation of the three separate City fire departments into Heartland Fire & Rescue. I will miss him personally and the entire East County Heartland region will miss him collectively. He is leaving very big shoes to fill for his successor.”