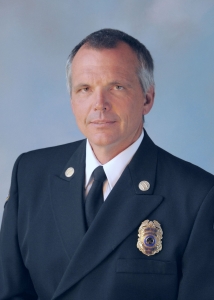 October 17, 2018 (San Diego’s East County) --The Cities of El Cajon, La Mesa and Lemon Grove, which jointly manage Heartland Fire & Rescue, have selected Steve Swaney as the next Fire Chief.  The City Managers for the three cities (Graham Mitchell of El Cajon, Yvonne Garrett of La Mesa, and Lydia Romero of Lemon Grove) made the announcement that Swaney will begin serving in this capacity on October 20, 2018.  Chief Swaney replaces Colin Stowell, who recently was appointed Fire Chief for the City of San Diego.

Swaney, 55, began working for the City of El Cajon, and later Heartland Fire & Rescue, in 1985.  Swaney most recently served as a Division Chief.  In his role as Division Chief, Swaney oversaw the daily operations of all the fire stations in the three cities, ensuring public safety needs were being met in the region.

In addition to the many roles under Heartland Fire & Rescue, Swaney previously served as the Fire Chief for the Julian Cuyamaca Fire Protection District, is a certified FEMA Canine evaluator, is a lead instructor for the FEMA Canine Search Specialist School, and has been deployed as a commander on many regional and statewide fire events.

Swaney graduated from California Coast University with a Bachelor of Science in Management.  He possesses an Associate’s Degree in Fire Science from Miramar College and is a graduate of the Leadership East County class of 2016. 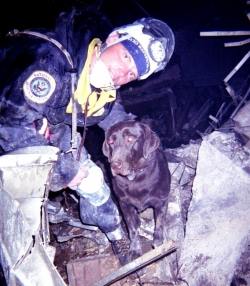 Photo, right:  Swaney and canine Sherman in New York City with the Los Angeles Urban Search And Rescue team. On loan from El Cajon, Swaney arrived within 24 hours of the twin towers collapse after the 9/11 terrorist attacks to aid in rescue efforts.

About the recent appointment, Chief Swaney stated, “It is an honor to have been chosen as the next Fire Chief of Heartland Fire & Rescue and I am excited for the opportunity to lead such a great organization.”

This single management team is a shared expense among the three cities. This unique cooperative fire services agreement provides cost containment opportunities, while maintaining local control. This combining of management responsibilities of three neighboring Cities ensures a high level of fire and emergency medical services delivery, and maximizes resource utilization by eliminating management redundancies that are experienced as separate organizations.