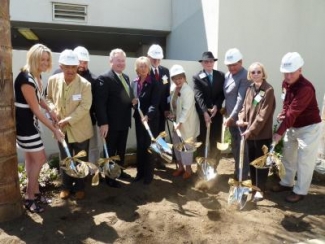 April 4, 2013 (La Mesa) – “This is an incredible day for East County,” Supervisor Dianne Jacob said at Wednesday’s groundbreaking ceremony for the new Heart and Vascular Center at Sharp Grossmont Hospital.  “As our aging population in East County grows, there is a growing need for a heart and cardiac center that is state of the art,” added Jacob, who quipped, “Some of us may be lining up at the door.” 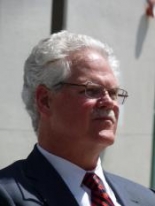 Michael Murphy, President and Chief Eecutive Officer of Sharp HealthCare (photo, right), praised visionaries and philanthropists, hospital volunteers, board members, doctors and nurses for their contributions to create a “great place of health and healing” that will “expand and improve the care for patients in East County.”

The three-story, 71,000 square foot Heart and Vascular Center will help decrease the high cardiovascular disease mortality rate in East County, hospital officials indicated.  The center will include new cardiac catheterization labs and multipurpose procedure rooms to support a wide range of specialties, including general surgery, minimally invasive surgery and image-guided surgery, as well as endovascular interventional procedures.  The facility will also include a clinical lab and pharmacy.

The new facility will be placed adjacent to the hospital’s existing operating rooms and cardiac cath labs, with another 17,000 planned square footage for renovating of older areas  in addition to the 71,000 square foot new facility.    Completion of phase one is slated to be done by March 2015, with full build-out of the top level by mid-2017. 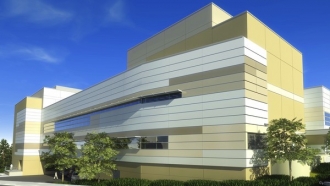 Construction cost of over $60 million is funded by Proposition G, a $247 million bond approved by taxpayers on the June 2006 ballot.  In addition, a $10 million capital campaign is underway to purchase equipment and medical technology for the interior of the new facility at our region’s largest free-standing hospital. 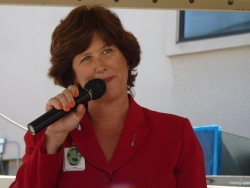 Beth Morgante, Vice President of the Grossmont Hospital Foundation (photo, right), announced, “We’re well on our way to raising $10 million for this project.”

Donors introduced at the groundbreaking ceremony included Ed and Sandy Burr of EDCO Disposal Corp., co-chairs of the fundraising effort. 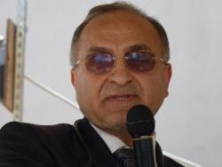 Morgante also acknowledged Dr. Suhail Zavaro (photo, left), a cardiologist who helped raise $186,000 and on Wednesday, presented a check for another $25,000.

Dr. Michael Long, Grossmont Healthcare District President, thanked taxpayers, donors, and the Board of Directors.  “We are excited about the start of this facility,” he  said, then pledged that the board will provide proper oversight of bond expenditures. 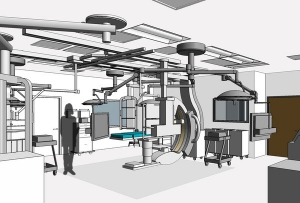 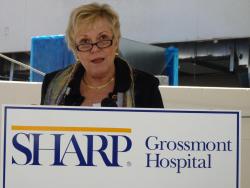 “The new Heart and Vascular Center is just one component of an overall master site plan which includes multiple projects over many years,” said Michele Tarbet, Senior Vice President and Chief Executive Officer at Sharp Grossmont Hospital.  “We are Sharp Grossmont are committed to meeting the future health care needs of the community.”