By Miriam Raftery
Photo:  Simulation of maximum temperatures on July 3 from American (GFS) weather model at two meters above the ground. (University of Maine Climate Reanalyzer)
July 22, 2019 (San Diego) -- Around the world, on virtually every continent, all-time heat records were shattered in July, CNN reports. And here in San Diego, a model created by scientists and journalists predict just how hot our region will become in future decades as the impacts of climate change take hold.
In Northern Siberia, along the Arctic Circle, the temperature hit 90 degrees on July 5th –40 degrees above normal for the usually frigid region.
In Canada’s Quebec province, the heat caused at least 54 deaths with temperatures reaching nearly 98 degrees in the Montreal area.
Africa recorded the continent’s hottest temperature ever reliably measured—more than 124 degrees in Algeria.
In Europe, a heat wave reached triple digits in France and in Scotland, intense heat caused some roadways to melt, the BBC reported.
Here in southern California, UCLA recorded its highest temperature ever at 111 degrees on July 6th.
And across the U.S., over 400 locations had record highs broken last week alone, with the heat wave causing at least six deaths.
New York cancelled a major marathon. Washington D.C. declared a heat emergency. And in Baltimore, a police department with a sense of humor posted on social media  asking criminals to please refrain from committing crimes until the heat wave was over, quipping, “Conducting criminal activity, in this extreme heat is next level henchmen status, and also very dangerous."
These scorching records in July follow the hottest June recorded in the 200 years that humans have been keeping track of temperatures, the National Oceanic and Atmospheric Administration reports.
Fifty years ago, extreme heat waves were rare, the New York Times report. But scientists warn that climate change is what’s fueling more and more extreme heat waves – just as the scientists predicted. 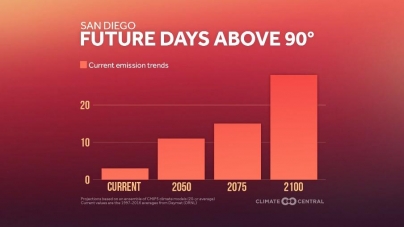 So how much worse will it get?
Climate Central, an organization of leading scientists and journalists has been compiling data and conducting scientists’ research.  According to a new interactive model created by Climate Central, the city of San Diego currently has fewer than five days a year with temperatures above 90 degrees. But by the year 2050, they predict a dozen such days and by the year 2100, around 30 days a year will exceed 90 degrees in America’s Finest City.
If that sounds hot, be glad you’re not in Phoenix, where by 2021, the desert city is expected to have 60 days a year with sweltering temperatures over 115 degrees.
Extreme heat carries severe costs including increased loss of lives due to heat stroke, damage to infrastructure, increased utility bills, melting of polar ice caps which in turn brings rising sea levels and flooding to coastal communities, relocation of some coastal populations, and increased drought, reducing food supplies and raising food prices.

The UN, money & power have been pushing the world wide issue of "Global Warming". Our life cycles are a blink of the eye in the scheme of things. Our planet has been circling the Sun for billions of years, moving closer, then moving away, absorbing Gamma from sun spots that interrupt our electrical systems here and have the potential for much more damage. Could this be related to global warming and cooling? How long have "you" been here? Now the media is pumping out propaganda world wide probably at the request of the UN, to develop a base to put a carbon tax upon everything and everyone. No denying, we are good at making a mess like plastics, trash, Streets of San Fran & LA. "Slowly killing ourselves"? Scientific data says we are living much longer vs 250 years ago. I believe there is room here for Chicken Little to squawk some.
Adding to the natural earth cycles, humans are slowly killing themselves. Environmental pollution is very real despite what some people say to the contrary. We have only one earth. Keep disrespecting it and life forms will continue dying off, including people.