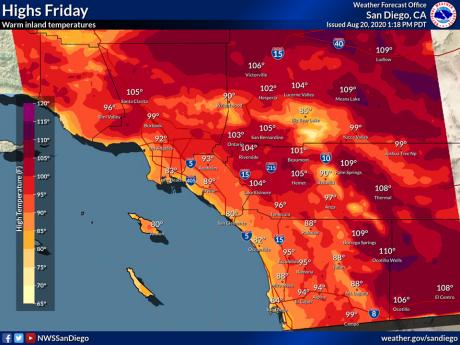 By Miriam Raftery
August 20, 2020 (San Diego’s East County) – Triple digit temperatures are forecast yet again tomorrow across portions of San Diego’s inland region.  This week’s scorching heat wave has shattered some all-time records. On August 17, a temperature of 106 degrees Fahrenheit in Campo broke the old record of 103 set in 2001.
The highest minimum temperature in the Lake Cuyamaca area was a balmy 76 degrees this morning, up from the old record of 70 degrees set in 2012.  El Cajon tied its all-time minimum temperature of 71 degrees.