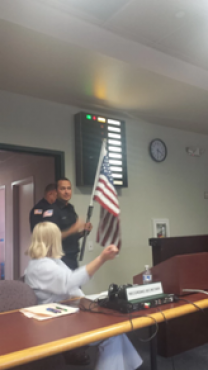 Upon a motion by Director McKenna, seconded by Director Kim Raddatz, the board voted unanimously to direct the Fire Chief to hire a consultant to plan, direct and oversee the due diligence processes and respective timelines, and make recommendations back to the Board on options for placement of a short-term and/or permanent fire station at 657 E. Bradley, El Cajon.

According to Fire Chief Criss Brainard, the station has been in existence for over 50 years and needs work. It is also not in a central location. The Board hopes to find a better location, “so when we respond we provide equal response to all of Bostonia,” Brainard said.

While San Miguel was a part of Cal Fire, they bought a property to build a new station on, which Brainard thinks is still not central enough. “There's very limited property available in Bostonia. To them (Cal Fire) it made sense. Me as the fire chief now, the piece of property they brought can only have a max of four bedrooms. That area is getting busier and busier. We may need to add additional crews,” Brainard said.  That would mean another move within five years.

Brainard thinks that saving the $1.5 million to build a station at the less than ideal property, to create a permanent station central to Bostonia, would be a better use of funds.

The decision to not build on the new property and instead find a different property was made in March by the Board in a 4-3 decision.

While the vote ended up being unanimous, that did not prevent contention about the item from occurring earlier in the meeting. During the Director’s comments, Director Bill Kiel used his turn to begin discussing the issues he has with the way it is being handled. Kiel mentioned that the last meeting had been moved to a time in which he could not phone conference in, despite giving the Board several times that would work for him. Counsel interrupted him to read the purpose of Director’s comments from the Brown Act.

Kiel responded, “You are trying to stifle what I have to say.” He insisted that the public had a right to know about the problematic way moving Station 19 is occurring.

Board President Theresa McKenna said, “We're trying to keep the agenda in line with the Brown Act. You're putting words in my mouth.” McKenna said Kiel could discuss Station 19,  but only when agenda item nine was reached.

Before agenda item nine was reached, the Board returned to a closed session that lasted nearly two hours. When the Board returned for the rest of the agenda at 8:13, the public had dispersed and only Secretary Nancy Roos remained to record the session.

In the open session in which many firefighters and members of the public were present, firefighter Eric Hille presented the Board an American flag he had crafted to attach to every apparatus. It had a spring in the pole so that it would bend rather than break when it hits something. It also had LED lights on it so that it could be displayed at night. Hille created his first flag while deployed in Afghanistan and has continued to develop his skills since that period. 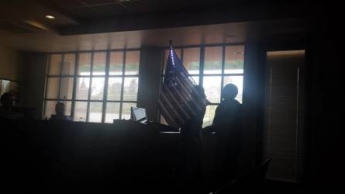 Chief Brainard also told the Board about two new rigs, which have long-term design problems. However, their contract with Spartan ERV “does not have wiggle room,”  Brainard said. He hopes that some of the problems can be fixed in-house, because issues such as how rough they ride can lead to back and neck problems. The District cannot get different fire trucks better suited to their needs in the current contract.

Brainard also told the Board that deferred maintenance on stations was now being addressed as they try to improve the living conditions for firefighters. “We’re doing things in a priority fashion to get things back up to shape,” Brainard said.

The next board meeting, in which Station 19 will probably still be a hot topic, will be held on Wednesday, Aug. 23 at 5:30 p.m. at District Headquarters.

"The piece of property they bought" wasn't central primarily because it was in the Lakeside Fire District, 4046 feet (thanks Google) from the relocated Lakeside fire station 1 which began service in May of 2016. It was purchased to place it closer to CSA-115 (which also is not in San Miguel's district) in order to try and capture the revenue to provide service which Santee had the contract to provide previously. At least this board is now thinking of the citizens of Bostonia who, incidentally, along with Crest, pay THE highest fire protection taxes/fees in the entire County of San Diego. https://goo.gl/maps/wrR4q7TDPHp