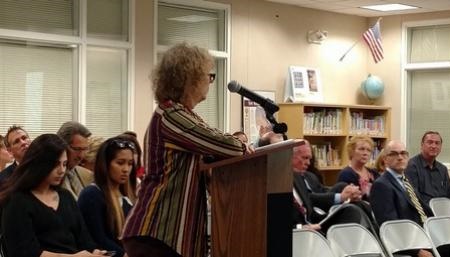 April 12, 2016 (Jamul) - At a hearing April 5 in Jamul held by the County Office of Education’s committee on school district reorganization, some speakers were in favor and some were against redistricting proposed by the Grossmont Union High School District (GUHSD).  The plan approved 4-1 by the GUHSD would break the district into 5 trustee districts for future elections.

A major objection raised by Alpine residents has been that the plan would pair trustees Priscilla Schreiber and Robert Shield in the same district. Since Schreiber’s term ends in November and Shields lasts until 2018, Schreiber would be off the board and unable to run short-term, leaving Alpine without its only advocate for an Alpine High School on the board.

GUHSD attorney Christopher Skinnell objected to characterizations that Schreiber is being “forced off the board” and clarified that Schreiber “will finish out the term and can run in 2018.” True, but that’s small consolation to Alpine residents who will be assigned Jim Kelly, a vocal opponent of an Alpine High School, as their sole representative.

There were six speakers at the Jamul hearing.

First, Tony Teora, who is running for 71st Assembly, spoke. “I’m here to listen tonight…I think (splitting up the district) is a good idea,” he said but noted that the details matter.

Mary Beth Kastan, East County resident and principal of Valhalla, mentioned, “I attended the hearing last week at the East County Regional Center. I was struck by the questions and comments on the board, in particular how parents were notified…as a school, we have made weekly calls” and have also posted on their websites and discussed at “site government meetings,” and they have even visited the classrooms. She also added that the Parent Teacher Association has sent out the information.

Heidi Doss of the Valhalla PTA said “I heard about these meetings…I felt this was very important to be here tonight…I am very vested in the community and schools. I love the idea of having [representation] where people live. I’m totally supporting it.” She added that the PTA has made efforts “to make the public aware of these meetings through phone calls and emails.”

Jim Kelly, GUHSD trustee, stated “I’m speaking for myself as a private citizen, not as a board member like I did the last two hearings with you,” an apparent effort to respond to ECM criticisms that he defamed ECM’s editor while speaking for the district.  However tapes of prior hearings make clear that Kelly has never mentioned he was speaking as an individual. He reiterated that he spoke against Schreiber “and her mouthpiece Miriam Raftery (ECM’s editor).” He then went on the attack against Raftery again. “She is an advocate, not a journalist. You witness Mrs. Raftery advocate against...the CVRA (California Voting Rights Act)... she admitted she sent out one email to board members requesting an interview.” (Multiple emails and interview requests were made, including at least two in writing sent to Kelly on the redistricting issue; he has never responded to any interview requests through the years).

He went on, “She is not seen as an objective reporter; she is seen as an advocate…I’m trying to expose her as a fake journalist.” (Note: ECM has sent Kelly a notice advising him this is slander and defamation.) He derisively called ECM a “blog” even though the publication has 88 major journalism awards and has 150,000 visits a month on average, second only to the Union Tribune in online news readership countywide. He further claimed, falsely, that no local educators have agreed to be interviewed by ECM.

ECM’s editor, Miriam Raftery defended herself and ECM against Kelly. “Mr. Kelly is entitled to his opinion, but not to change the facts.” She pointed out that journalists have every right to editorialize and that after covering the board for 20 years and being slandered by trustee Kelly, she has good reason to speak out.  She also indicated that to avoid any appearance of any conflict of interest, she has assigned Janis Russell to write up the hearings on redistricting.

She rebutted multiple false statements by Kelly. “I’ve certainly interviewed educators and political figures including Mr. Teora,” she noted. (Raftery and/or ECM have interviewed some current members of the GUHSD and additional candidates for the board, co-hosted a debate among GUHSD candidates with the League of Women Voters (which Kelly attended as an audience member), interviewed members and candidates of other local school boards in addition to former educators including Supervisor Dianne Jacob, Congresswoman Susan Davis, Assembly member Shirley Weber and State Senator Marty Block.

Raftery testified that the invitation remains open for any GUHSD board members to participate in an interview. No one has responded to multiple interview requests.  She further made clear, “I’ve never advocated against the CVRA” but indicated she is concerned about problems with the current map. “I think you got a feel from Alpine about what’s going on,” she said. Alpine residents, in a heated hearing last week, accused the board of political motivations for redistricting Schreiber off the board and many made clear that they do not want to be represented by Kelly. Raftery noted that since the district is being sued over its actions regarding the Alpine High School and a proposal for Alpine to leave the district is pending, it would be “inherently unfair” to remove Alpine’s only advocate off the board at this time when critical decisions about Alpine’s future are being made. “What’s the rush? Say no,” Raftery said of the GUHSD’s proposed map.

Ben Kalasho, president of the Chaldean American Chamber of Commerce, said the Chaldean Chamber initially “didn’t know how we would vote on this…I think the perception I had was that it was an imminent thing we had to do...” He spoke up for Schreiber and said she “has been an advocate for the Chaldean community…what I do like to see is an end to the bickering back and forth.” He added. “I’m not sure how sold I am to representation due to race.” He also added that he as a Chaldean wouldn’t vote solely for a Chaldean to represent his community. “I want to get to know the other board members [of GUHSD],” he added. He questioned the need to redistrict before the November election to avoid a CVRA lawsuit, as the district has claimed was the motivating factor for haste. “If a lawsuit were to happen, you wouldn’t be able to see a judge before November anyway…use us as a conduit to reach the Chaldean community,” Kalasho concluded.

The committee then had a chance to ask questions or make comments.

Mark Anderson mentioned he’s had 12 years of school, four years of college, and two years of grad school. What he remembers most is Latin in college. He thought of the phrase “Vox populi,” which means ‘voice of the people.’ “I certainly appreciate hearing the voice of the people…school boards of all levels are probably the closest contacts to politics [for the public].” He added how these meetings were important, “so you can express your concerns on a very important issue.  I want to thank you for being here, especially the young people,” he concluded.