SNOW LEVEL COULD BLANKET AREAS DOWN TO 4,000 FEET 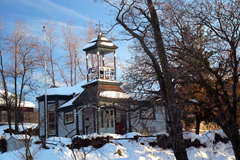 The first storm system is predicted to bring rain, wind and show to the region from Sunday night through early Tuesday. This will be a cold storm that originated in Canada and will likely bring snow levels to 4,000 feet or lower. Heavy snow is possible in the mountains with a foot or more at higher elevations. An inch of rain is forecast for lower elevations.

A second storm is on track to hit our region Wednesday night and is expected to bring moisture from the tropical West Pacific. The second storm could bring widespread heavy rain and more snow, though at much higher elevations.  Boaters are warned of large surf and dangerous boating conditions.

Check road conditions before driving in mountain areas during or after a snowstorm, since chains may be required and roads closed in some areas.