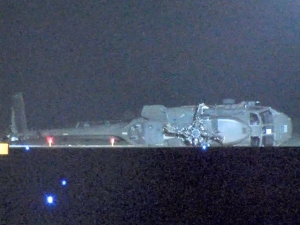 The guardsmen were forced to make an emergency landing during a routine training mission. Both the pilot and co-pilot were able to escape from the crashed helicopter on their own and were transported to a local hospital.

The rotor sheared off in the crash, 10 News reports.  Cause of the crash remains under investigation.