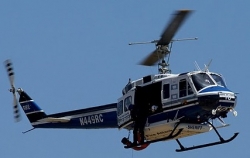 March 20, 2011 (Borrego Springs) – Copter 10, crewed by Cal-Fire and San Diego Sheriff personnel, was dispatched to aid a downed hiker in Palm Canyon in the desert at Borrego Springs around 4:55 today. “Initial reports were that the victim had overdosed on a hallucinogenic drug and had possibly sustained a spinal injury,” Deputy Scott Bligh said.

The Copter 10 crew located the victim along an established hiking trail in the canyon. Tending to the victim were a Borrego Fire paramedic, a park ranger and a deputy sheriff. Cal-Fire rescue specialists immobilized the patient, 22, and secured him to a backboard for helicopter transport out of the canyon.

While loading the patient into the helicopter, he became highly agitated and attempted to free himself. He was restrained by CalFire and sheriff's personnel until landing at the Palm Canyon campground, where he was released to Borrego Fire paramedics.