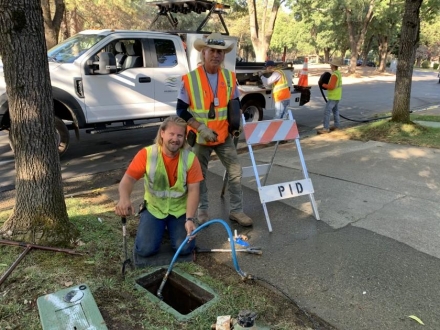 East County News Service
Photo courtesy of Helix Water District
September 4, 2019 (Paradise, Calif.) --The wildfire that killed 85 people last year in Paradise, California burned down nearly the entire town, destroying over 19,000 structures.  It also left more than 10,000 residents without water deemed unfit to drink. The fire burned through pipes and also contaminated most water mains with chemicals.
So Helix and Padre Water Districts in San Diego’s East County have joined with other water agencies around the state to help restore drinking water to many residents in the northern California community in August.  Now some Paradise residents can turn on their tap for the first time in over eight months and have clean water to drink, bathe and brush teeth.
Last month, Paradise’s water district was able to restore water quality in most of its water mains and the focus shifted to helping individual customers test their water and if contaminated, replace their water lines.
It’s all part of the California Water/Wastewater Agency Response Network set up through the state’s Office of Emergency Services—a system that makes residents in fire-ravaged Paradise in one sense more fortunate than those living in Flint, Michigan, where many residential water pipes remain contaminated with lead that makes their water still too toxic to drink.
Dan Baker from Helix Water led the local team in Paradise, where many residents are still living in trailers, waiting to rebuild.
“If you closed your eyes, all you heard were friendly people. Everyone in town was very positive,” Baker. “But, when you looked around, there were trucks and workers everywhere — rebuilding.” 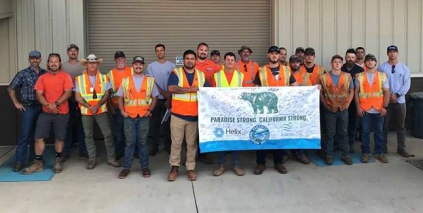 Photo, right:  The crew from Helix and Padre Dam with Paradise Irrigation District employees. The banner is signed by Helix and Padre Dam board members and employees.
At the end of July, the California Department of Resources Recycling and Recovery (CalRecycle) reported that they had removed 75 percent of the structural debris from the Camp Fire in Paradise and Butte County, including 1.6 million tons of ash and debris, over 518,000 tons of concrete, 37,000 tons of metal and over 446,000 tons of contaminated soil.
On August 6, Paradise residents gathered to hear the progress reports from all the local and state agencies involved in rebuilding the community. The California Office of Emergency Services is developing a plan to remove the hazardous trees still standing, the town is opening a resource center to streamline the permitting process for residents rebuilding their homes, and the school district is making sure the new school year begins on schedule.
But a safe water supply is still an issue. The water distribution system was contaminated during the fire with Benzene, a known carcinogen. Fire officials believe that the system depressurized during the fire and sucked in a toxic mix of gases from burning homes. This also happened in Santa Rosa during the Tubbs Fire in 2017.
Paradise Irrigation District General Manager Kevin Phillips reported to residents on August 6 that the district lifted water advisories on 133 standing homes and is testing and restoring water quality at 30-50 standing homes each week.
When Helix offered mutual aid assistance through the Office of Emergency Services, Phillips said they had cleared the gases from their water mains, but could use help testing and restoring water quality in customer service lines. Helix sent Baker and Bryan Watte from its meters and valves section and John Wilson and Eric Hughes from its construction section to provide that help.
From 6:30 a.m. to 4 p.m. each day, the four went from one water meter to the next, collecting a water sample at each standing home and installing a highline to deliver safe water to the home until the sample was tested and the customer service line approved for use. They also assisted with the installation of backflow prevention assemblies to prevent contamination from the ongoing construction throughout the community. Phillips reported to residents on August 6 that  Padre had installed 275 backflow prevention assemblies to date, and had 400 more to install.
Monday evening, after their first day in Paradise, Baker emailed Helix Operations Director Kevin Miller, “There’s a lot of work up here but the town is healing. I think I speak for all four of us when I say I’m proud to be a part of this.”
In fact, Baker was speaking for everyone at Helix. Field Supervisor Paul LaFalce said, “We lost four valuable people back here at Helix for a week, but everyone was so supportive of what was happening in Paradise that they covered for them and made up the difference. It was good to see.”
The four took with them to Paradise a  “California Strong. Paradise Strong.” banner signed by board members and district employees at both Helix and Padre Dam. Helix engineer Jeff McMaster emailed, “Sending a crew to help, the banner, this definitely reinforces the pride in working here.”

I hope the employees receive recognition by whatever means the Padre and  Helix  agencies can provide. A week off and a Certificate or Achievemant?  A cash award?  My employer had methods to do this. An award from the AWWA?