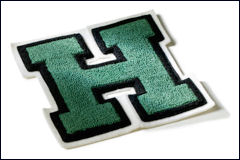 By Mayan Avitable
December 3, 2011 (La Mesa) -- The atmosphere on the campus of Helix Charter High School was certainly electric as I walked across campus to attend a tour and program titled Excellence in Education. The Highlanders' football team was getting ready to play for a title in the Division II semifinal game against Mission Hills High School.  The football team would play in one and a half hours -- more about that later.
The Excellence in Education program began with a brief history describing how Helix became a charter school. Helix High School, built in 1952, has had a tradition of excellence in many areas. Upon becoming a charter high school in 1998, the school became able to develop the program the community, staff and students wanted. Together, they decided to be a college prep school for all students. Their new graduation requirements became the entrance requirements of the UC/CSU (University of California/California State University) system. The mission and the graduation requirements were certainly ambitious.
As the programs were developed, everyone kept a close eye on the students. The schedules, the services, and the instruction kept pace with the college prep requirements. As students needed help, the staff, college students, and community members provide tutoring where needed. 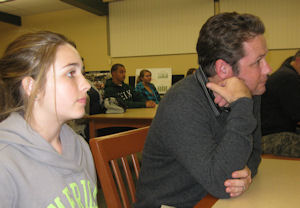 As the evening program began, there were many parents with their sons or daughters. Mark Morgan and his daughter Gillian attended the program to help her decide whether to go to Helix, or another school. Gillian said, "I like volleyball, cross country, and the block schedule." Michael Austin's mother, Stephanie Crogan was very impressed with the program presented during the evening. Michael was also using the information to decide his school of attendance.
Mrs. Crogan and others attending the program had every reason to be impressed. Kevin Osborn who is one of the grade level principals led the presentation, and pointed out the many improvements since the school converted to a charter school. One of the improvements was the increase in attendance. Since the 1997-1998 school year, the attence has risen from 94.5% to 97%. Although this is a small increase, each additional student attending benefits the school in many ways.
Another improvement is in the Academic Performance Index. The API is California's overall assessment 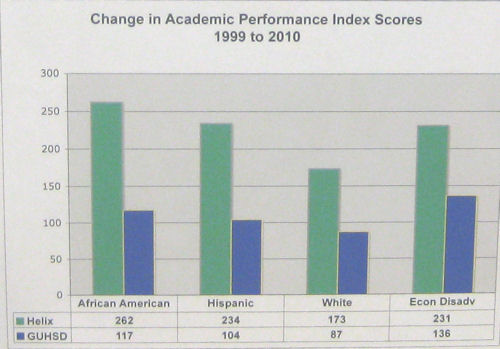 program. It appears the goal of educating all students is being met very well. The scores for all of the students are above the others schools in the district, and the scores of the state. The graduation rate and the number of students attending college have also increased.
Much more information and a tour of one of the newer buildings completed the one-hour presentation.  Upon returning from the tour, a former student, Nate Howard, commented by video how his life and his world changed by attending Helix Charter High School. It would be worth the entire program to see and hear his presentation.
There are additional tours planned between January and May 2012.  In order to attend, guests need to RSVP. By clicking on the RSVP link, you can see the dates and times of the future tours.
Oh, and by the way, the Highlanders moved another step closer to winning their division with a 21-0 Division II semifinal victory over Mission Hills. Helix plays Oceanside in Monday’s championship game at 4:30 p.m. at Qualcomm Stadium. 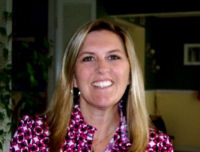