June 13, 2017 (Lemon Grove) - Helix Water District Board President Joel Scalzitti operated the excavator this morning, lowering a segment of PVC pipe into the trench at the corner of Mt. Vernon Avenue and Golden Avenue in Lemon Grove.  The pipe was signed by the Lemon Grove City Council and Helix board members, and its installation marks the removal of the last large segment of cast iron pipe in the water distribution system serving the city of Lemon Grove.

“This is an important milestone for our engineering team and for our Lemon Grove customers,” said Lugo. “Each segment of cast iron pipe we remove reduces the possibility of pipe breaks and service interruptions.”

Cast iron pipe was the most commonly used pipe material in Helix’s water distribution system from about 1926 to 1949. By 1959, Helix’s system included 185 miles of cast iron pipe. In 1963, however, the number of leaks from the district’s cast iron pipes reached 1.5 per 10 miles of pipe – just under 30 leaks a year.

In 1967, the district committed to replacing all cast iron pipe. In 2005, the board approved the Cast Iron Pipe Replacement Project for the replacement of the remaining 67 miles over the next 20 years.

The success of this project is largely due to a protocol developed by Helix’s engineers for assessing and prioritizing which pipes to replace first, based on prior history of pipe breaks, soil conditions, water pressure in the pipe, and the potential for property damage if a break were to occur.

Helix is replacing approximately 15,000 linear feet of cast iron pipe per year and, at this rate, will complete the program in 2026. 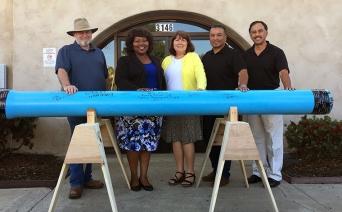