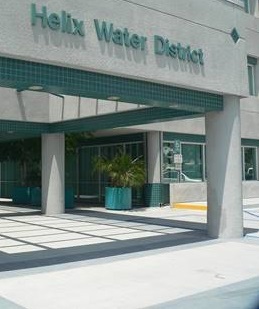 Source: Helix Water District
March 19, 2019 (La Mesa) - On March 27, 2019, the Helix Water District Board of Directors will hear the final report on the compensation and benefits study conducted for the district by Reward Strategy Group. The public workshop will begin at 6:00 p.m.  on March 27 at Helix’s administration office, 7811 University Avenue in La Mesa.

The survey compares the salaries for 54, or approximately half, of Helix’s employee classifications, from customer service representative to civil engineer, to the salaries for similar positions at 23 other public agencies in Southern California, including water districts, cities, the County of San Diego and State of California positions within San Diego County.

The survey shows that the salaries of almost 70 percent of Helix’s employee classifications are reasonably competitive, with the district’s current salary range maximums falling within plus or minus five percent of the median.
“The results are consistent with our past compensation surveys. Helix is in the middle of the pack of public agencies,” said Helix General Manager Carlos Lugo.
The survey also shows that Helix has an appropriately competitive benefits package compared to both the public sector and the private sector.
“Our strategy is to offer competitive salaries, not the highest salaries, and to point to the quality of our workforce, culture and performance to attract top talent to Helix,” added Lugo.
“With baby boomers retiring, the competition for talent is heating up. But we have to balance the needs of our employees and our customers.”
Helix conducts a compensation survey every two years. This year, the board requested that a third-party consultant complete the survey and the district retained RSG. The San Diego-based firm has provided compensation and human resources consulting for over 30 years.
Helix Water District provides water treatment and distribution for 275,000 people in the cities of El Cajon, La Mesa and Lemon Grove, the community of Spring Valley and areas of Lakeside -- east of downtown San Diego. Helix also provides treated water to neighboring Padre Dam, Otay and Lakeside water districts.