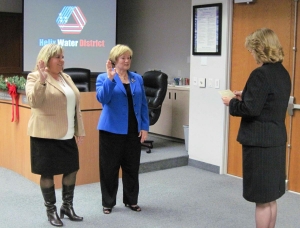 "The District's challenge during this period of rapidly increasing wholesale water rates is to keep our rates as low as possible and still maintain our $500 million of infrastructure and develop important new local water supplies," Verbeke said as she assumed her duties as president. "I am excited about meeting this challenge."

Verbeke has been a resident and property owner in Division 2 for 23 years. She has served as vice president of the Helix board for the past two years and on the district's Audit and Ad Hoc Water Rate committees. She serves on the Association of California Water Agencies (ACWA) Desalination Subcommittee and is a board member of ACWA's Region 10.

Curiously, member Charles Muse nominated John Linden to be vice-chair, although member Kathleen Coates-Hedberg was next in line for the slot, a regular observer of the Board informed ECM. No other names were nominated and Linden was voted in for the second-in-command slot.

Hedberg confirmed that she was next in the line of succession for the vice presidency. “I’m disappointed, but I didn’t have the votes,” she said in response to an e-mail from ECM.

Dexter Levy, a retired plumber and water activist, suggested that Linden was hypocritical for accepting the post. “The funny thing is that two years ago John Linden was very vocal about rotating positions for President last rotation," Levy recalled in an e-mail sent to ECM, “but he was strangely silent this time when his name was the presented as nominee for Vice President (out of Rotation).”

But Board spokesman Ted Salois disputed those statements. "The election of the President and Vice President of the Board follows Policy 9.1-3 of the Policies and Procedures Manual of Helix Water District. There is no policy regarding the rotation of the Board into these positions." He provided a copy of the policy and added that the minutes do not include a rotation statement.

The minutes, however, are summaries and not a word-for-word transcript.

Hedberg has been an outspoken member , raising objections over violations of the Brown Act/open government laws.  She opposed rate hikes that she argued were inequitably applied.  (The Board later rescinded a vote on rates and later revised the rate structure with more public input.)

Hedberg also drew criticism from fellow board members for speaking to media after Director Mark Weston asked board members not to contact him after hours except on urgent matters. Weston said calls on his Blackberry wake him up, as he keeps it on for emergencies, and that he preferred not to answer e-mails after business hours. (He later rescinded the request, following media coverage.)

Hedberg holds a degree in civil engineering from California State Polytechnic University-Pomona as well as a masters in environmental health from San Diego State University.  She has served on the Helix Water District Board for the past four years and represents the southeast Mt. Helix, Casa De Oro, Spring Valley, and La Mesa areas.