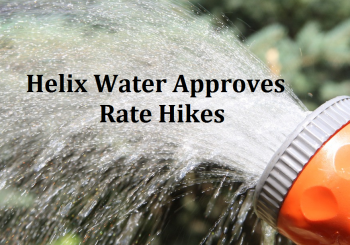 August 3, 2016 (La Mesa) – With scarcely any public notice, Helix Water Board passed a 10.3% rate hike by a slim one-vote majority. The stated reason was because water use has dropped due to customers conserving water--just as the district asked them to do.

The board majority has taken the position that since they  approved a controversial five-year rate increase last year, there is no need to go through the full public hearing process again.

However, when the board approved the five-year hike last October, it was presented as merely giving the board the option to raise rates up to certain limits. The board ingored hundreds of ratepayers who voiced near-unanimous opposition to the rate hikes.

Back then, Hedberg raised concerns over future public input. The board chair promised the process would be transparent, with the public given ample notice to participate and raise objections.

But instead, the board sent out its agenda  on Friday, the only notice of Tuesday’s rate hike item on the agenda. That’s too late for some print weekly newspapers or ECM’s weekly e-newsletter deadlines.  Moreover the meeting was held at 2 p.m. when most ratepayers are working.  Not a single public hearing was scheduled with substantial public notice for participation, as was done for all previous rate hikes. The process, it seems,is about as transparent as the murky polluted waters at the Brazilian Olympics.

With no significant public notice of the rate hikes on Tuesday's agenda, only three members of the public spoke, all opposed.

Tom Brady suggested the board should look at cutting operating costs instead of rating rates.

Gordon Place said directors’ responsibility was to keep costs low and asked that they look at healthcare costs for all employees.

Ignoring those ideas, director Linden moved to approve the 10.3% rate hike, the higher of two options presented by staff.(The lower proposed increase would have been 8.5%).

Directors Linden and Muse, who voted for the rate hike, both have their seats up for reelection this year.

Linden has filed for reelection; Muse has not yet filed papers.

Mark Gracyk has filed to run for Muse’s  seat in district 3. He has over 20 years of professional water management experience and currently works as the Reclaimed Water Manager at the Marine Corps Air Station at Miramar.

Gracyk  was present at that meeting last October when the board approved the five-year rate hike.  “People felt powerless. That’s when I decided to run,” he told ECM.

Asked his reaction to today’s rate hike, he said, ”Approving this rate increase without scrutinizing the operating costs and operating budget goes against what the directors are entrusted to do, which is to look at all aspects of the budget and operating expenses of the district."  Gracyk added, "I am running to represent Spring Valley and Lemon Grove, which are not the wealthiest communities, filled with working class families. Such a big increase will have a negative impact on their household budget.”

He added that it's unfair to penalize residents with rate hikes for doing the right thing--saving water.

Dan McMillan, another reform candidate who has voiced concerns about rate hikes, has also indicated he plans to run against Linden in district 1, which includes El Cajon north of I-8 to Pepper Drive.  He wants to bring business management skills to the board. McMillan has served 12 years on Padre Dam Municipal Water district, where he was president. He also served six years on the San Diego County Water Authority board, chaired the San Diego County Wastewater Management District, and now serves on San Miguel Fire Consolidated District Board.  In addition he is an accountant and CEO of a construction and management corporation.

"I believe the Helix Board’s action of raising the water rate by over 10% was uncalled for at this time. The Board needs more members with a strong management and finance background to help make these decisions,"McMillan told ECM. "The Majority of the Board continues to Rubber Stamp staffs request for cost and  rate increases rather than looking at each and every possible cost cutting measure.   The Board needs to understand that higher cost equals higher Water rates."

He added, "The Board has yet to understand the inelasticity of the water demand curve and continues to raise rates, thereby leading to less use and the need for higher water rates."

McMillan said the board also "also acted impulsively at the October Board Meeting when they approved a Proposition 218 rate increase of 70% over the next five years without knowing the future effect of El Nino and the districts future operating costs.   As a speaker at the October meeting I was appalled at the format of the meeting and the treatment of the audience,": he concluded. "Obviously the staff knew they had a problem and called the Sheriff, whom correctly remained in the background."

He should have to provide his address to the Registrar of Voters,but he told me he is running in Linden's district, not Scalzitti's.

How exactly is Mcmillan going to run for Helix ,Don't you have to live in the division you represent for Helix ? Doesn't He Live in the same division as Scalzitti?