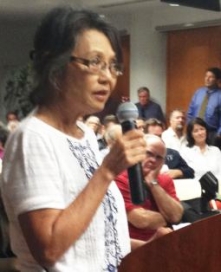 October 8, 2015 (La Mesa)--Emotions got nearly out of control at a packed Helix Water District meeting Oct. 7 as customers lashed out at the board’s plan to raise rates over the next five years.

After more than three hours of presentations from water district staff and testimony from angry customers, the five-member elected board voted 3-2 to adopt a five-year rate increase plan, beginning Nov. 1 and continuing to 2020.

Bimonthly bills for an average customer using 26 units (one unit equals 748 gallons) will rise from about $142 to $155 through next June. The rates will increase by a maximum capped limit of 11.6 percent, 11.8 percent, 7.3 percent and 7.6 over the next four years.

While district staffers assured customers those rate caps can be adjusted down, and they would have a chance to weigh in on any proposed increases in the future, all of the three dozen speakers opposed the five-year plan.

Things got heated about an hour into the meeting as the district’s hired consultant began his presentation.

Several people shouted out they heard enough of the district’s reasons behind the rate increase. “We’re not here for pie charts and graphs! We want to be heard!” yelled Peter DeLuca.

Others shouted similar statements prompting one man at the front to yell back, “I just moved here and I want to hear it!”

More than 200 people attended the meeting with many lining up on both sides of the room, and more in the hallway outside the room. Hundreds ratepayers also sent in letters protesting the rate increase.

Helix General Manager Carlos Lugo tried to quell the outburst but it took several minutes before Habib Isaac from Raftelis Financial Consultants could continue his presentation.

Although Helix Water already adopted a two-year rate increase plan in 2013, the district said a five-year plan would give both the agency and customers a clearer idea of what to expect going forward. Having rate caps in place would avoid excess rate spikes should the drought worsen, and let customer better budget for the future, said HWD staffer Jennifer Bryant.

HWD received a total of 557 protests to its plan but that fell far short of the minimum 23,000 that were needed to reject the district’s plan.

Many speakers said they were outraged by the plan which made no sense in light of their conservation efforts, which resulted in HWD reaching a 28 percent decline in water use from July to September.

“No one here walks on water but you say you can see into the future and predict what the rates will be,” said Bob Cedardahl. He and others criticized the district’s high operating expenses, particularly the salaries and benefits of its 150 employees.

Cindy Denny said she cut her water use by 56 percent, including using buckets while showering to water her yard, but her bill keeps climbing. She compared Helix’s rates to the rates paid in Lakeside which according to one graph in the presentation are the lowest in the county. She noted that Helix is selling water to Lakeside as well as other water districts. 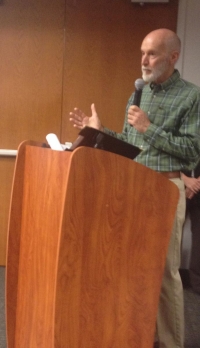 Larry Nichols (photo, right), chair of the Grossmont-Mt. Helix Improvement Association, has been organizing opposition to the measure and convened a meeting of concerned citizens last week that filled the auditorium at Murdock Elementary School.

“Your notice of the public hearing is deficient in many areas,” he told the board. “I urge a no vote to this five-year plan. We don’t object to a one-year plan for next year.”

Lydia Chang (photo, top left), a homeowner, called the rate hikes “unreasonable” and questioned the projections made by staff.

Several speakers opposed the district’s tiered pricing schedule, saying it was unfair and said the agency should adopt a flat rate for everyone, regardless of how much water they use.

“The rates should go up only according to their wages,” said Robert Capita, who railed out at what he viewed as price gouging. “I get the feeling that we’re dealing with the Mafia here.”

Several speakers charged the district wasn’t doing enough to cut its expenses, especially when it comes to its labor costs. “You’re irresponsible to give your employees the same kind of pensions that the city of San Diego does,” said Bob Annet. “No one in America should be able to retire when they are 50 years old.”

District staff countered that as a nonprofit, it cannot charge more for the water than it costs, and the increases were caused mainly by a severe reduction in customers’ water use, and increases imposed by the San Diego County Water Authority, which provides 95 percent of its water.

SDCWA, in turn, is raising the price on its water because of recent hikes by the Metropolitan Water Authority in Los Angeles, which controls the water allocation and pricing for all of Southern California.

The SDCWA also has been investing a lot of money into system upgrades in recent years, including a $1 billion desalination plant in Carlsbad, said Bryant.

But these and other explanations about the rationale for the increases weren’t received well. “There’s an underlying agenda here,” said DeLuca. “It’s about salary increases and raises for your employees.”

Several speakers said the district could have saved money by including the meeting notice with customers’ regular bills or sending by email or postcards. HWD Counsel Kelly Salt said state law requires sending the notice by mail separately, and that it be mailed more than 45 days before the Oct. 7 meeting.

Board member Joel Scalzitti initially motioned to adopt a two-year plan for rate increases, which was supported by Kathleen Hedberg. That was voted down by the board majority, 3-2.

Subsequently, DeAna Verbeke put the recommended five-year plan on the table, which passed by the same 3-2 vote, with directors Hedberg and Scalzitti voting against the five-year rate hike.

The next morning, chats on the Mt. Helix Next Door online forum and emails among other some GMIA members centered on finding candidates to run against those who voted for the first-ever five year rate hikes in the Helix Water district.