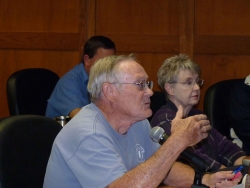 February 18, 2010 (La Mesa) – By a unanimous vote, the Helix Water Board voted yesterday to disband an ad hoc committee on rate increases after several citizens objected on grounds that the process was not transparent.

“Your ad hoc committee has two board members on it,” Josan Feathers, a registered civil engineer, observed. “So when the ad hoc committee brings its recommendations to the Board , it only needs one more vote.”

Ray Lutz, founder of CitizensOversight.org, a watchdog group, urged the Board to abolish the ad hoc committee and instead, move its regular meetings from 2 p.m. to evening hours when more members of the public could attend.

“You don’t want to end up like Poway,” he said. Schuppert later informed ECM he was referring to passage of a steep rate hike in Poway, where residents didn't wage a battle prior to passage and reacted with surprise and anger after their rates went up.  Poway's mayor reportedly later said he regretted his vote. 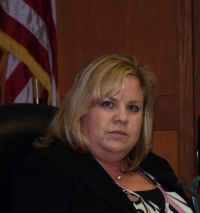 The Board voted unanimously to eliminate the ad-hoc committee, though Board member Kathleen Hedberg clarified that she objected to the proposed rate hike schedule. Hedberg has argued that the Board should wait until it knows what rates it will be charged before hitting ratepayers with higher fees.

“Kathleen speaks for the people every time,” said Feathers.

The board will likely present preliminary rate studies April 7, according to Mark Weston, general manager of the Helix Water District.

Gordon Place, an area resident on a fixed income, urged the board to tighten its belts and try to avert hefty rate hikes. “We consumers are getting hit in every direction and we are having to scrub our budgets at home.” He asked the Board to “scrub your budget down to the bare essentials.”

The Board did take some actions to pare back costs. Helix is entering into a cost-sharing agreement with Sweetwater Authority, Padred Dam Municipal Water District and Otay Water District to complete the Joint Water Agencies Natural Community Conservation Plan/Habitat Conservation Plan. Agencies that lack land, such as Padre, will pay mitigation fees to larger districts such as Helix that have more land.

The Board also authorizes an online auction of surplus items, from window frames to an emergency utilities trailer that has been under-utilized, according to Weston.