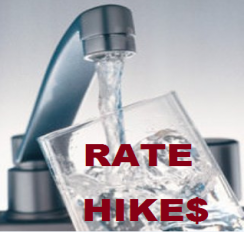 September 2, 2015 (La Mesa)—Helix Water District’s board will hold a public hearing on Wednesday, October 7 at 5 p.m. at its board room (7811 University Ave., La Mesa) to consider adopting rate hikes over the next five years.  View notice of the public hearing on proposed rate hikes.

The plan is drawing strong opposition including the Grossmont-Mount Helix Improvement Association, which is organizing a public forum on September 30 at 7 p.m. at Murdock Elementary School (4354 Conrad Drive, La Mesa).  The GMIA is also urging residents to write to Helix to register formal opposition.  The GMIA has posted a sample letter here.

Calling the five-year plan a “shock”, a letter sent to GMIA members states, “The proposed plan will permit, but not require, the District to increase rates 70% over the next five years—regardless of conditions..The character and quality of our region, as well as home values, is at stake.”

The GMIA wants to see rate hike decisions made on a year-by-year basis, evaluating actual conditions and notes that an El Nino forecast for this winter could significantly  increase water supplies locally.

Helix cites impacts of the statewide drought, the Governor’s mandatory cuts in water consumption and fines to districts that fail to comply as factors justifying rate hikes.

But Helix residents have thus far exceeded the 20% cutback goal set by the state, cumulatively reducing water usage 28% as of July, Helix board member Kathleen Coates-Hedberg states in an e-mail to constituents.

Another reason given by the district is the increase in operating costs and capital improvements. The district cites anticipated 20% cuts in water sales and increased price of wholesale water that Helix buys from the San Diego County Water Authority.

However the SDCDWA just won a lawsuit against Metropolitan Water District in Los Angeles. Under the court ruling in August, MWD must pay the SDCWA over $188 million—money that potentially cut be used to offset any planned hike in water rates locally.

The district has cut its operating budget substantially in the last five years, including staff reductions.

The proposed rate hikes include increases in water meter charges, fire service charges, and the cot per unit of water for single-family homes, multi-family residential, commercial and irrigation.

How to protest:  Any property owner or tenant who pays a water bill in the district can submit a written protest.  Only one protest per parcel will be counted.  Protests must be submitted in writing or in person to Helix Water District, attention Board Secretary-Public Hearing on Proposed Water Service Fee Increases,  at 7811 University Ave, La Mesa, CA 91942, or at the public hearing on October 7th.   Note: E-mail protests do NOT count.  Your letter must state that you are a property owner or tenant opposed to the water rate increases and SDCWA pass-through adjustments, must also provide the location of the parcel (street address or assessor’s parcel number), and include your name and signature.

If a majority of the affected property owners and tenants timely file written protests, the proposed increases cannot be imposed.