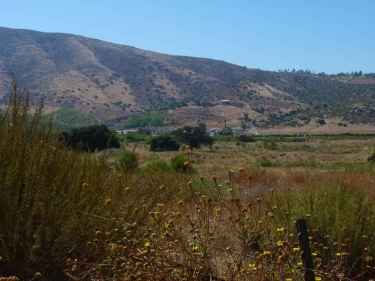 The payment is good news for customers of the Helix Water District, where hefty rate hikes to balance budgets led to a ratepayer revolt and ouster of two incumbent board members last election.  But the final payment dashes hopes of El Monte Valley residents and Lakeside community planners opposed to El Monte Nature Preserve’s proposed   sand mining operation to extract 18 million tons of sand over 15 years from the El Monte Valley on the site.

If the new owner had defaulted on the final payment, Helix could have exercised its right to take back the land. The sand mine proposal is currently pending environmental review and would ultimately need approval of both the County Planning Commission and County Supervisors. Residents have opposed the project based on noise, traffic, environmental and health concerns due to presence of Valley Fever.  The valley is s designated county scenic view corridor and home to numerous threatened or endangered species. Long-range, once mining is completed, the plan calls for turning the site into a nature preserve.

Helix Water District President Joel Scalzitti, in a press release, states, “Now board members have the task of deciding how to use the $8 million to best serve Helix ratepayers. Some serious and thoughtful discussions are ahead. We want to do what’s right for our customers. Receipt of this check means the disagreement over El Monte Valley is officially over and behind HWD.”

n 1997, El Capitan leased the El Monte Valley property from HWD with plans to develop a golf course. Those plans were abandoned in 2005. Three years later, El Capitan and HWD were locked in a costly and lengthy legal dispute over the El Monte Valley acreage. HWD agreed to a settlement to make possible the sale of land the district no longer needed and to avoid the expense of continued litigation.

The 2014 court-approved settlement allows El Capitan—which changed its name to El Monte Nature Preserve LLC--to purchase 460 acres at the appraised value.  Although public agencies are not always required to get independent appraisals for transactions involving land sales, HWD did for this transaction.  According to the settlement, El Capitan (El Monte Nature Preserve) was given until December 2017 to exercise its option to purchase the Lakeside property.  A one million dollar option payment was paid to HWD when the agreement was executed in 2014.

Before completing the land sale, HWD was required by law to offer the property to other public agencies, including the San Diego River Conservancy. None chose to exercise the option.

HWD serves 273,000 people in La Mesa, Lemon Grove, El Cajon and Spring Valley, as well as areas of Santee, Lakeside and some of the unincorporated parts of San Diego County.