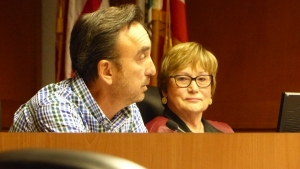 Photo, left:  Directors Mark Gracyk and DeAna Verbecke offered opposing views on how board vacancy should be filled

January 5, 2016 (La Mesa) – At a packed meeting yesterday,  Helix Water Board members aired differing views on how to fill a vacancy left by the resignation last week of newly elected member Lu Tejeda. Tejeda cited conflicts of interest raised by his job with a contractor.

The new board majority pushed to appoint Dan McMillan, whom Tejeda narrowly edged out by just 185 votes in the four-man race. Both ran on a platform of reigning in rising water rates.

Director DeAna Verbecke dissented, calling for the district to accept applications and conduct interviews with all interested parties in an open meeting before making an appointment.

“The election is over. In light of Lu Tejeda’s win,  I think we should consider any applicants who may wish to apply,” she told ECM after the meeting.

But Director Mark Gracyk countered that the lengthy election process took many months last year, adding, “any interested party could have come forward at that time.”

Director Joel Scalzitti agreed, adding that going through an application process would mean costly staff time.  He added that McMillan is “interested and engaged. He wants to do the job.”

Director Kathleen Coates-Hedberg pressed for the board to make an appointment immediately at yesterday’s meeting.  But Scalzitti cautioned against a “rushed” process.

Ultimately the board opted to hold a special meeting on January 18th at 6 p.m. to allow more time for the public to weigh in on the process. 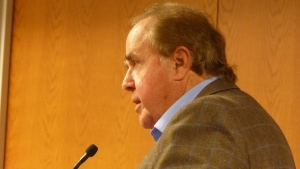 After the meeting,  Dan McMillan spoke with ECM.  “The board is doing fine and I agree with the process they are taking.” He added that he is still “extremely interested in serving the people of District 1, with my background in business and water.”

He noted that he’s previously served on water and fire boards, adding that he has ideas for lowering rates or holding down rate increases.

McMillan had filed a complaint with the District Attorney’s office challenging Tejeda’s residency.  Tejeda has told ECM that issue was resolved by paperwork he provided to the D.A. to document his residency.  Asked about Tejeda’s resignation, McMillan replied that Tejeda provided “a reason that he wanted to resign, and I accepted it.”

The agenda included discussion of a proposal by Gracyk to move meetings  from 2 p.m. to 6 p.m. , as members of the public have frequently requested.   All four board members indicated they would now support changing the meeting to evenings,  but kicked the decision until the special meeting next week to allow staff time to draft up the ordinance language.

Staff reported that 10 e-mails and a phone call received all supported moving the meetings to 6 p.m.

Lemon Grove Councilmember Jennifer Mendoza also spoke in support. “It’s very important for customers, but also for the Council members,” she said, noting that in Lemon Grove,  four of the five Council members work daytime jobs.  She is the appointed representative to cover Helix meetings but has not been able to attend many due to her job, she said, adding that most members of other city councils in East County also have day jobs.

McMillan also testified.  Moving meetings to 6 p.m. would “send a strong signal to the public that you are looking for their input,” he said, then suggested the board could hold any closed session meetings earlier.

Larry Nichols, president of the Grossmont Mount Helix Improvement Association, noted that there is “heightened awareness now among ratepayers after rate increases.”  Even though a past attempt to move meetings to evenings years ago failed to draw bigger crowds, Nichols predicts, “They’ll show up now to see how the sausage is made.”