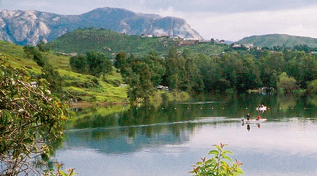 November 22, 2013 (La Mesa) – Several directors of the Helix Water Board indicated a willingness to vote to close Lake Jennings permanently or at least remove camping facilities and end fish stocking to save funds. But in the end, after public testimony and a proposal by director Joel Scalzitti, the board unanimously voted to form a committee to see if an alternative can be found.

Carlos Lugo, General Manager, led off the hearing earlier this month by stating that a  September workshop on the issue did not have a high attendance.  The lake has been a financial drain on the district and a consultant’s analysis predicted that even investing in major upgrades would not result in a profit.

Public testimony was split among tax hawks who want the district to stop subsidizing the lake and save money for ratepayers by shutting down the lake or outsourcing operations, versus area residents who enjoy day visits or overnight stays at the lake and want to see the popular recreational facility spared.

“We subsidize libraries.  I don’t think that was a waste of money,” said Bob Reed.  “We support art because it adds beauty to our life.”  He added that he only recently discovered Lake Jennings, which he called a “hidden gem.”  He added, “It’s under utilized because a lot of people don’t know about it. “  He urged that the board keep the lake and its facilities open, adding, “Government should support certain things just for the beauty of it and the benefit of the people in this district.”

But a Mr. McCully testified that the lake is “not profitable,” adding “that may be because private individuals are not involved.”  He added, “If only one percent of ratepayers utilize the lake, and we’re told that we’re subsidizing those using the lake, we need another option. Lease it out or see it maximize benefits to taxpayers.”

Director Chuck Muse indicated, “I would prefer option one,” which would be to close the lake permanently to the public.  He cited a net loss of $120,000 and noted that “two of the most ardent supporters here voted against the rate increase.”  He said he could also support option two, closure of campgrounds and stopping stocking the lake with fish,” but “under no circumstances would I support option three or four.” The latter two options would involved major investment  in upgrading and modernizing the lake’s recreational facilities.

Scalzitti said he was “appalled at the alternatives” and said the workshop presentation did not offer enough information, only “gloom and doom.”  He chided the board for failing to get another consultant’s analysis.  “When my truck needs a new transmission for $6,000 I take it somewhere else to get a second opinion.”

He acknowledged that some subsidy would likely always be necessary but added that short-term, the cost of running the lake is already figured into the budget for the benefit of everyone in the community, not merely ratepayers in the district.  “We haven’t put effort into trying to make this work,” he concluded, adding, “That’s the heart of our district.”  He motioned to create a two-year committee to come up with alternatives.

Director De Ana Verbecke voiced her views. “I don’t think we should keep this campground.” But she said she wanted to keep the lake itself open.  “It’s beautiful….It is an asset to our community; we should have it more like Lake Murray with a walking path all the way around.”  But as for camping, she concluded, “I don’t see any way that we can make money.”

John Linden, another board director, said he saw “no reason to go any further with discussions.”  He indicated his decisions are made “strictly on business sense” and noted that “the advisors said there is no way campgrounds will ever make a penny. We should stay in the business we are in, the water business.”  He voiced support for option two, keeping the lake open without campgrounds or fish stocking.

Director Kahtleen Coates-Hedberg said she would support forming a committee and voiced skepticism over the consultant’s dire predictions.  “The campground was 77 percent occupied two weeks ago,” she observed.  “Ninety percent of those (campers) say they love it and will come back; 50 percent are return customers.  I think it’s more about trying to get the message out and the word out.”  She asked if the lake has to require a state fishing license.  Santee Lakes does not require a state fishing license.

With the majority of board members ready to remove campgrounds and stop stocking the lake with fish, and two willing to shut down the lake completely, I decided to testify.

I was the last speaker, pointing out that we've covered several government-owned recreational facilities that recently have partnered with private foundations to raise funds and support the parks. I cited Mission Trails Regional Park Foundation, Friends of Lake Murray, Lakeside Riverpark Foundation, and Friends of Palomar Mountain State Park as examples. The latter raised enough funds to prevent the State of California from permanently shutting down the park. I also noted that more media outreach could help get the word out about this hidden resource in our region.

In the end, the board voted to support Scalzitti’s plan for a short-term committee to explore options to see if Lake Jennings can be saved.

I agree with Bob Reeds sentiment, the recreation opportunities should be maintained especially because Jennings is close to "town" and some may not be able to afford to drive farther to enjoy the outdoors.  Like to Cuyamaca Lake that is also operated by Helix Water District. Why is Cuyamaca such a success?

I just thought of one idea...maybe others will have more (or better) ideas: how about having fund-raising days at the lake? Advertise it as something like a nature day or something for families. You could have local restaurants donate hamburgers/hot dogs or something and charge people for them...you could have activites and contests like first person to take a picture of an osprey or something wins an award (lake photographer of the day, for example, and post it on the lake's website). Fishing contests, too...stuff like that. You could have informative sessions like talks about local wildlife. I'd love something like that and I'm sure lots of other people would too!

This is very depressing to me :( I'm a new Mom (my husband and I have a 2 1/2 year old daughter and a three month old son) and I'm dreaming of the day we can take our children camping at Lake Jennings. I seriously have been looking forward to it so much and I am crushed to hear I may never be able to. We planned on going when our kids are older, like 5 and 3 or something like that. We would definitely be repeat customers...we'd go every summer and maybe other seasons too for sure! Let's please figure out some way to keep it open!! I think it's very important to have places like this in nature locally for families to enjoy, especially in this day and age.