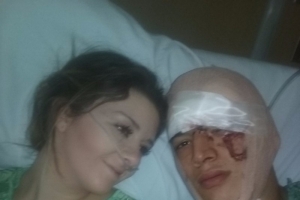 Update 1/4/17: Sierra has had a setback; she was slated for release but had breathing difficulties so her breathing tube has been reinserted.

December 31, 2016 (El Cajon) – A Go Fund Me site has been set up to help a young couple from El Cajon seriously injured in a car accident  on Christmas Eve that occurred when a driver pulled out of a side street in front of them in El Cajon; the impact spun their vehicle around 180 degrees.

Reuben DeHoyos Jr., 19, and his girlfriend, Sierra Marco, 17. were rushed to Sharp Memorial Hospital’s trauma with major injuries.  They both face 6-12 months of recovery, are unable to work, have large medical bills not fully covered by insurance and they are expecting a baby. 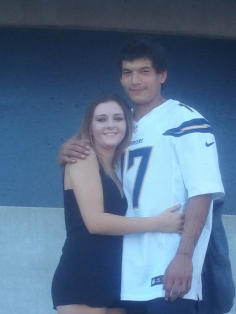 “Reuben had to undergo surgery to fix the damages to his face, “ his mother, Ericka DeHoyos, says, adding that more surgery is needed on his face. “My son has over 500 stitches and 17 staples in his head.”  He also needed grafting to repair his eyelid. Currently he can’t bend over without getting a headache, his mother adds.

Sierra suffered a collapsed lung and had a chest tube inserted. Her condition started getting worse, so they placed another chest tube in,” DeHoyos says.  “Sierra is unable to walk, unable to move, unable to sleep She needs 24/7 care and cannot move, rotate, or go to the bathroom without nursing are. She is tremendously sore and uncomfortable with lower body nerve damage.”

Both are still in the hospital.  Reuben works in construction with his father at ARD Maintenance and Repair, but will face a long recovery before he can return.  Sierra works in a doctor’s office and cannot return until cleared by a physician. She is also a student at San Diego Charter School in Lakeside. 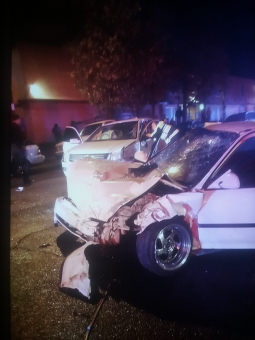 “Doctors stated they are lucky to be alive and they both should not have lived through this,” DeHoyos says, adding.  “It is truly a nightmare knowing you could have lost your children” due to another driver’s carelessness.

“Please, I am asking you to help this young couple and unborn grandchild…no matter how big or small, your donation will greatly be appreciated. They need a lot of financial help to get through his fro insurance will not pay for some of the bills that they are accumulating.”