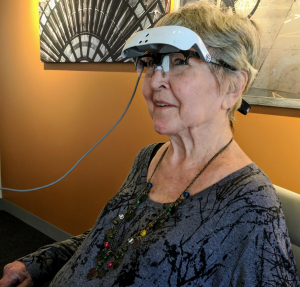 November 5, 2017 (La Mesa) – An estimated 285 million people in the world are blind, according to the World Health Organization. But 85% of those have some limited vision –and now a clinically proven, FDA approved  device called eSight has the ability to restor sight for most of those people—including  Mayan Avitable, our wonderful former assistant editor and a 33-year teacher in the La Mesa Spring-Valley School district.

Mayan was declared legally blind in March from macular degeneration.  eSight can restore her ability to see and work –if Mayan can raise $9,995 to purchase the portable device clinically proven to restore eyesight for those with her condition.  You can help by donating at her GoFundMe page, which thus far has raised about $1,400.

“I had to relinquish my clients for whom I was writing and editing,” says Mayan, who went from 20-20 to 20 -400 vision over just one year. That’s left her to struggle not only with  the disability of losing her eyesight, but also losing her income.

After learning of eSight from a friend, Mayan attended an eSight demonstration in Los Angeles in August.

“I was amazed that for the first time in months I was able to see numbers and letters from across the table!” she states on her GoFundMe page. She found she could also zoom, focus and control settings on the eSight remote.  “I grew excited that not only could I see again, but could connect to tablets and other electronic devices to watch movies, videos or other media. Upon leaving the demo, I felt optimistic that I would benefit from using eSight and resuming  my usual level of activity,” she says, adding, “The only challenge now is affording the cost of the eSight device...”

How does eSight work?

The wearable eSight electronic glasses have a high-speed, high resolution camera in the middle that captures what a user is seeing in real time, then uses a powerful computer to instantly process the high definition video and display it on two OLED screens in front of the users eyes, using cutting edge optics.  Proprietary algorithms enhance the video, which show full color images with no noticeable delay.  Viewrs can adjust eyewear to a position that offers the best view for them. Users can control color, contrast, focus, brightness and maginification.

The company’s founder, an electrical engineer, has two sisters who are legally blind and decided to assemble an engineering team to build electronic glasses that would let them see again.

At its website, https://www.esighteyewear.com, the company has links to six major medical institutions in the U.S. and Canada that participated in a clinical trial of eSight. These include the Johns Hopkins University Wilmer Eye Center, the Bascon Palmer Eye Institute at the University of Miami, Kellogg Eye Center a the University of Michigan, the Center for Retina and Macular Disease, the Toronto Western Hospital of University Health Network, and the Université of Montreal.  Data from the trial should be published later this year.

eSight is available for purchase in 33 countries, and has been covered in numerous articles in other media.

The device offers hope to bring millions of people around the world out of darkness, potentially replacing the need for devices such as white canes and Braille reading devices.

Mayan is hoping that her former students, parents of students, ECM readers and community members will help her regain not only her vision, but her independence.

She concludes, “eSight is positively changing the lives of many people with low vision and that’s what I wish to achieve soon, with your kindness and generosity.”

You can donate to help Mayan at her GoFundMe page.

I have macular degeneration so I tried NuEyes electronic glasses and was able to see! This is a competitor to eSight and they are half the price but I am a veteran so my cost was covered by the VA. Give NuEyes a try if you are considering eSight.