January 2, 2017 (San Diego) – The National Marine Fisheries Service is asking for public help to save black and white abalone from disappearing forever along the coast of California and Baja Mexico—the only places in the world where they are found.

If you’ve seen black and white abalone offshore, or if you know of any threats to these protected mollusks, you’re asked to please report this information by calling Melissa Neuman, abalone recovery coordinator at 562-980-4155. You can also report sightings or tips at www.Regulations.gov. 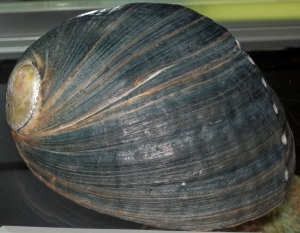 The National Marine Fisheries Service has published its five-year status review of the black and white abalone. The public has until Feb. 21 to add comments.

Abalone are not only tasty to eat, they also control algae and provide food for sea lions and sea stars.  It is currently illegal to catch or eat them, due to their endangered species status since 2001. White abalone were hunted to near extinction in the 1970s. Black abalone, though also hunted, also fell prey to a bacterial wasting disease that decimated their population, so they were added to the endangered species list in 2009.

The goal of the federal review is to determine whether the abalone are still endangered. But information gleaned during the monitoring of their existing wild communities, threats and successful recoveries also will be used to save them.

Scientists believe that the few known colonies of these abalone are too small to reproduce fast enough to save these species. So researchers at UC Davis Bodega Marine Laboratory have been propagating abalone in tanks and hope to someday release them into the wild. But they need genetic diversification—so they’re hoping the public may report previously unknown colonies.

Recently abalone have been found farther north than in the past, typically at rocky places along the coast. Black abalone eat kelp, so they are most often found in the intertidal zone. White abalone, by contrast, eat algae and are found in rocky areas farther offshore.