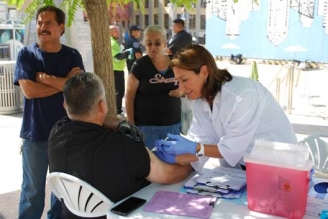 December 19, 2017 (San Diego) -- This holiday week, County Health and Human Services has some cheery news. The region’s hepatitis A outbreak appears to have peaked--and there is a significant drop in the number of new cases reported.

Between May and September, there was an average of just over 84 confirmed cases per month. That number slowed to 34 cases in October and dropped to 20 in November. So far, there have been just two confirmed or probable cases reported in December.

Dr. Wilma Wooten, the County’s top public health official says, “This downward trend in outbreak activity is evidence that our strategic approach of vaccination, sanitation and education has been working to halt this outbreak.” But she adds,  “It’s still important that anyone with a known risk for hepatitis A who has not been vaccinated do so now so we can continue this trend.”

Since the outbreak was identified in March 2017, there have been 571 confirmed cases resulting in 390 hospitalizations and 20 deaths.

The County and community partners have given 113,230 vaccinations, most of those to people in at-risk populations including the homeless, IV drug users, gay men, health workers and those who work closely with people in high risk groups..

The County is also providing education and food safety guidelines to the faith-based community so they can continue their charity and food distribution efforts over the holidays in the unincorporated areas of the county, though the city of El Cajon has prohibited public feedings of the homeless until the County ends the emergency declaration.

The County Board of Supervisors on Tuesday extended the local health emergency for hepatitis A another two weeks.

For general information on hepatitis A, visit the HHSA hepatitis website where data is updated routinely. A hepatitis A fact sheet is also available.