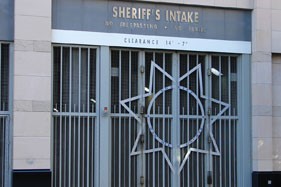 That prompted criticism from Dave Meyers, a candidate running against Sheriff Bill Gore in 2018. Meyers, in an email sent to those on his distribution list, states, “Sheriff Bill Gore has ignored basic CDC standards for sanitation and disease prevention in the county jails and has managed them as if they are a solution to homelessness.  As a result, the county jails have served as an incubator for this epidemic.”

ECM asked the Sheriff ‘s Department to respond. Public Affairs Director Ryan Keim replied that in 2013, a Grand Jury report focused on the county’s jail immunization program and offering immunizations for various disease in accordance with federal Centers for Disease Control guidelines, which did not recommend Hepatitis A to all inmates.

“Hepatitis A vaccinations for adults were only recommended by the CDC if some other risk factor was present,” he added.

Although the case of Hepatitis A San Diego County during the current outbreak began in fall 2016, the first diagnosed case in a county jail was not until April 2017.  After that, the Medical Services Division in coordination with Public Health “immediately began thorough contact investigations to see which inmates were at risk,” he said.

Inmates who had been in contact with an infected person were then encouraged to get the Hepatitis A vaccine.

“While the Sheriff's Department cannot force an inmate to receive vaccinations, we have been able to encourage more than 2,300 individuals to receive one,” Keim advises. Of 84,000 bookings a year, 16 inmates entered county jail facilities who were already infected with Hepatitis A. “An additional five inmates are believed to have contracted Hepatitis A in a county jail,” Keim says, adding, “unfortunately, three of those inmates refused a vaccination that could have possibly prevented the infection.”

The Department does not have any documented cases of Hepatitis A involving employees.  “As always, the Sheriff’s Department will continue to prioritize the health and safety of our inmates and staff, Keim state, adding, “We have identified, educated, and offered vaccinations to those employees who are in contact with inmates.”

ECM sent a followup question asking Keim to comment on the santitation concerns raised by  Meyers, but he has not provided a response on that issue.