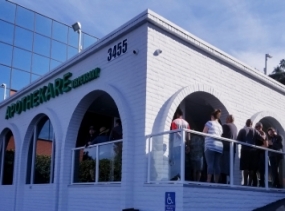 January 2, 2018 (San Diego)—Customers lined up before dawn at several of San Diego’s eight legal recreational marijuana shops that opened their doors January 1st.  The city was among the first places in California to permit recreational cannabis sales under Prop 64, which voters approved in 2016 and which is now in effect.

ECM reporter Rebecca Jefferis-Williamson visited the Apothekare in Mission Valley on New Year’s Day.  “No, I do not smoke, but I am a writer and always curious,” she posted on Facebook.

She found a line wrapped around the building outside and snaking through the dispensary’s interior as well.  To gain access, customers had to be “buzzed” in through two areas with security guards.

Contrary to popular belief that recreational pot is attractive primarily to millennials, our reporter observed “many gray haired people” purchasing pot products as well.  KPBS reports that at another dispensary visited by their media outlet, the vast majority of patrons were not from San Diego, though it's unclear whether San Diego is experiencing a marijuana tourism boom, or whether these were tourists in town anyway over the holidays. 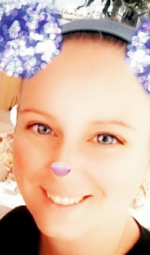 nside the Apothekare, bud tenders such as “Nicole” (photo, right) offered up advice on products ranging from marijuana for smoking/vaping to edibles including some in packages with signs touting “sensible size, high dose.” 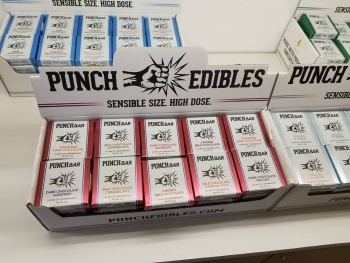 Smoking marijuana in public places is prohibited. You can transport it legally in California in the trunk of your vehicle, up to the legal limits. It is illegal for a driver or passenger to smoke or use ingestible forms of marijuana in a vehicle.  Driving under the influence of marijuana is illegal, though California has not established precise standards so an arrest is largely up to an officer’s discretion such as if a driver is observed weaving or driving erratically.

Delivery services are legal within San Diego but thus far, not in East County communities.

You can also legally grow up to six plants per household, though some jurisdictions have imposed limits such as indoor growing only, and may allow landlords to prohibit growing your own entirely.

While the city of San Diego has legalized recreational marijuana dispensaries, state law does not require local jurisdictions to permit sales – and the County of San Diego as well as cities in East County have banned recreational sales.  Voters in La Mesa and Lemon Grove have approved medical marijuana sales, with several medical cannabis dispensaries in the pipeline.

Visitors to legal dispensaries can choose from a variety of forms that may include tinctures or drops taken under the tongue, ointments or cream pain rubs, as well as smoking, vaping and edible products.

First-time users should be cautious when trying edibles, that can produce hallucinogenic effects if too much is consumed. Be sure to check dosage recommendations, which may be only a bite or two of a cookie—not the whole thing, for example. 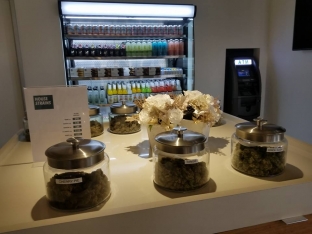 Marijuana contains THC and CBD, two active components.  THC produces highs, while CBD does not. CBD is favored by medical patients who don’t want to get high, but seek relief from symptoms such as seizures.

There are two psychoactive strains of marijuana, sativa and indica.  Sativa tends to be stimulating while indica is calming or sedating. There are also hybrid versions available with a combination of the two.  Both produce highs.

Although most states have legalized medical marijuana and about a half dozen have legalized recreational marijuana, all marijuana use and sales remains illegal under federal law.  Border Patrol checkpoints, including not only those at the international border, but also those inside the U.S. up to 100 miles from the border such as along I-8  in Pine Valley and along I-5 near Oceanside do seize any marijuana found. Drivers can be arrested and charged, so it’s wise to avoid carrying any marijuana products if you are driving through a checkpoint area.

Though marijuana can have positive effects such as providing relief from pain, seizures, or nausea from chemotherapy, it remains a schedule one drug at the federal level and does have some documented negative health effects. So before you light up or try another form of cannabis, recreational or medical, consider these facts.

Among the most concerning negative impact cited by medical professionals is that multiple studies have shown a link between marijuana use and increased risk of schizophrenia.  For instance, Scientific American reports that evidence presented at the World Psychiatric Association’s World Congress in Berlin in October reported that pot use by adolescents  is a “major risk factor” for developing schizophrenia and the more pot is consumed, the higher the risk becomes.  One New Zealand study reported by the BBC back in 2005 found adolescent use of pot doubled the risk of schizophrenia. Some other studies have found links between heavy use at older ages and psychosis, though other studies have conversely found cannabis may be beneficial for treating other mental health conditions.

Smoking marijuana, as with smoking tobacco, can have long-term impacts on respiratory health, some medical experts warn. Marijuana use by pregnant women has also been found to produce babies with lower birth weights, according to a comprehensive report on the benefits and negative effects of marijuana published last year by the National Academies of Sciences, Engineering and Medicine.  The organization recommended increased research to determine the safety and effectiveness of marijuana for a variety of conditions.