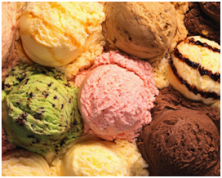 October 25, 2012 (La Mesa) – Two visitors to the Baskin Robbins store in La Mesa tonight weren’t looking for Rocky Road or Rainbow Sherbert. Instead, the men forced employees to the floor at gunpoint, then robbed the ice cream shop located at 8807 La Mesa Blvd.

La Mesa Police received a call reporting the robbery at 9:47 p.m. According to police, one of the suspects pointed a small revolver at store employees, ordering them to lay down on the ground. The employees complied with the demands.  The suspect then ordered one of the employees to fill a bag with cash from the store register.

Both suspects fled the scene on foot in an unknown direction. No employees were injured during the robbery.

Officers searched the surrounding areas with the assistance of San Diego Sheriff Department’s ASTREA helicopter, but were unable to locate the suspects.

Suspect #1, who brandished the gun, is described as a black male wearing a white long sleeve sweatshirt with a gray sleeveless shirt over it, a green and black baseball cap, and white and black tennis shoes. Suspect #1 had a white cloth covering his face.