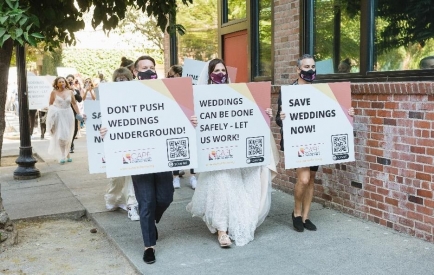 In a peaceful but lively protest, representatives from across the state – San Diego to Mendocino – expressed their collective disappointment that the private event planning industry is not included in the California Blueprint for a Safer Economy.

Organizers contend that millions of people have attended weddings across the nation since the COVID-19 pandemic began, but California has banned weddings and other large gatherings to prevent spread of the novel coronavirus, which has killed over 210,000 Americans as the race to develop an effective vaccine continues.

Speakers at today’s rally argued that prohibition forces weddings undergrounds, into backyards where masking and social distancing may not be observed. 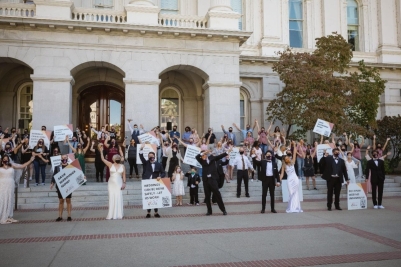 Indeed, a small wedding with just 62 people in Maine, where most guests did not wear masks or practice social distancing, resulted in at least 170 COVID-19 cases and eight deaths across multiple states, Healthline reported. None of the people who died attended the wedding; they were exposed through others who were at the ceremony.

Wedding and other event planners are asking for California weddings and other events to resume under guidelines similar to those provided for churches and restaurants.

“The weddings industry was the first to close in March and, without recognition by California’s state government, will be the last to open, potentially killing hundreds of businesses, thousands of jobs and millions of dollars.” states a press release from CAPE (California Association for Private Events). The group formed to reach out to Governor Newsom on behalf of the large and lucrative events industry in California and organized today’s march.

The events industry contributes over $400 billion annually to California’s economy, according to CAPE. Speakers at today’s rally point out that having no reopening plans or industry guidelines not only threatens the 3 million jobs supported  by the industry, but also leaves couples in limbo – some forced to cancel marriage ceremonies indefinitely, costly both financially and emotionally, with no idea when they can legally say “I do.”

The shutdown on events has also hurt nonprofit organizations which rely on charitable benefit events such as dinners, auctions and concerts to raise funds.

Event organizers of today’s “March for Weddings” hope that love will conquer all and persuade the Governor and legislators to take action to allow weddings and other private events to resume soon.

There is precedent for believing the eye-catching protest could lead to action. After hair dressers and barbers staged outdoor haircuts on the capitol lawn, the state allowed their businesses to reopen.

For more information on efforts to resume events in California, visit http://www.capecalifornia.org and http://www.facebook.com/SaveCAEvents.