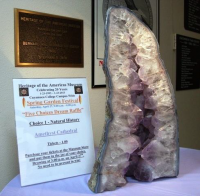 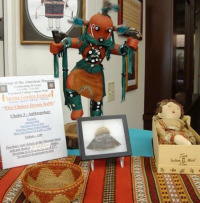 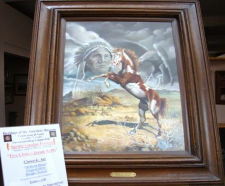 April 12, 2013 (Rancho San Diego)—“The Museum’s Five-Choices Dream Raffle is always a hit at the Spring Garden Festival.  Because it’s our 20th anniversary, we really went all out this year,” says curator Kathleen Oatsvall at Heritage of the Americas Museum on the campus of Cuyamaca College.  So the Museum chose five fabulous prizes—one to honor each wing of its museum (natural history, archaeology, anthropology and art) plus the museum gift shop.

Options include a massive amethyst cathedral crystal, pre-Columbian artifacts, a Hopi Kachina and other artifacts dating from after 1492, an oil painting titled “Medicine Horse” by Douglas Weaver, and a gift certificate to the Museum Store.

Tickets are $1 each and can be mailed in or purchased at the museum store—and you can circle which prize you would like to win. (Want lots of tickets?  The Museum staff will be happy to fill out each ticket for you.) Scroll down for details on these one-of-a-kind treasures.

For Natural History, I went all out and purchased an Amethyst Cathedral at the Rock and Gem Show in Quartzsite, Arizona.  Going to Quartzsite is a yearly event for me and I swear I have looked at a thousand amethyst cathedrals (I used to have to choose one as a prize for the El Cajon Valley Gem and Mineral Society’s Rock and Gem Show).  They usually have a lot of black cement on the back and bottom so that they will sit evenly.  For this specimen, Mother Nature made it perfectly, no cement.  It is the most beautiful cathedral I have ever seen.  It was all I could do to not buy it for myself, but I kept with my mission!   It’s Choice One.

The Archaeology Wing is filled with pre-Columbian artifacts, so we have a frame with Archaic Points, 2,000 year old Pottery Remnants from Mexico, a textile Chimu Birthing Scene – c. 1200 CE, and a Pre-Columbian Carving of a Head (it still has the collector’s notes on the back verifying pre-Columbian, the collection number, and a $900.00 price tag!).  You win these items with Choice Two.

The Anthropology Wing has artifacts from after 1492. To represent this wing, there’s a great Kachina, and Antique Doll, a Peruvian Woven Mat, a Wharton James School Basket, and a really cool Metal and Bone Ulu Knife c. 1930. Choice Three is perfect for the Anthropology Wing.

The Art Wing choice is a beautiful original oil by Douglas Weaver titled “Medicine Horse.” It was donated by Jeff and Sally Rogers.  It is appraised at $800.00.  You may have seen another Douglas Weaver painting in Case 65 of the Art Wing titled “His Favorite Wife.”  This painting is Choice Four.

Choice Five is our raffle prize to please anyone, a fifty dollar gift certificate for the Museum Store.  This would take the bite out of purchasing Mata Ortiz pottery, lapis lazuli, Huichol bead art, or one of the other treasures.