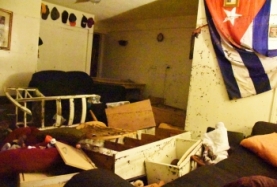 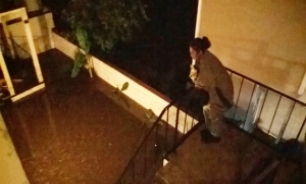 January 6, 2016 (San Diego)--With floodwaters rising to the ceiling in several apartments and homes built below-grade on 48th Street in City Heights, residents scrambled frantically to evacuate their children, elderly family members and pets last night.  A dog perished—but it could have been a far worse tragedy, if not for the astonishing courage of Gabriel Duarte.

Duarte, a construction worker, surely knew the hazards of jumping into floodwaters that had submerged lamps and live electrical wiring – waters choked with debris, dirt, and potentially disease.  Yet he risked his life to save others, entering several feet of water to unclog two submerged storm drains. Many of his neighbors credit him, for preventing further damage. He dove into the murky waters to clear two of the three storm drains that had backed up. 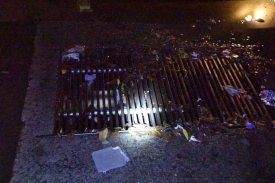 , “I jumped into the water that was up to my chest.” Water was coming out fast from a storm drain between the apartment complex and a house abutting the property that was recently remodeled.  There was a lot of dirt and some bricks on the storm drain (photo, left), according to Duarte. He removed the bricks and debris, which started to clear the brackish water.

But that was not the only drain that he cleared. “I took the trash off the one behind the apartment,” he said,pointing to a Waste Management, trash bin which the torrent of water moved about four feet.  Besides it lay a heap of trash.

In an exclusive interview, he pointed out that he jumped in with his wallet in his pants, as well as the money order he had to pay his rent on the 5th. Duarte lives in an upper floor so there was no danger to his property. He said he likes his landlord, and was glad to do this, for his sake and that of his neighbors.

Someone knocked a hole in a brick retaining wall to start water draining out of the flooded courtyard where Duarte fought to save lives.  Water climbed above the first story landing of the staircase (photo, right).  Duarte cleared dirt and debris away from both drains—and just in time.

Gabrielle Duarte said some neighbors broke windows to save others as a home flooded. 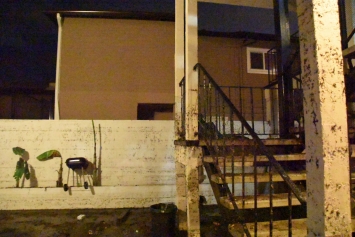 In a home on the south side of the apartment complex, Hector Vasquez stood beside yet another storm drain on 48th Street in front of his modest home, where floodwaters swiftly inundated the residence with his family inside.  “They never come and clean it, the storm drain,” he said, referring to the city of San Diego. “All the water just rushed in from there.  I was able to get my two-year-old son, my dog and my brother-in-law out.”

A man in the flooded apartment building at 4275 48th Street was not as fortunate.  He, too, waded into chest-high floodwaters, desperately searching for his two Chihuahua dogs. His upstairs neighbor, Jonathan Goetz, also braved the flooding to help.  One dog was found safe, but the other, named Nacho, was found unconscious in a bedroom.

Photo, below left:  A woman holds her rescued dog, Cha Cha, looking down at floodwaters covering a courtyard and apartments below.  Below, right, a man wades into waist-deep brown water trying to save another dog that perished. 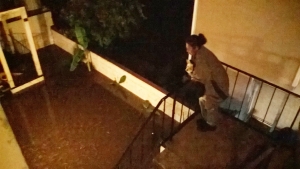 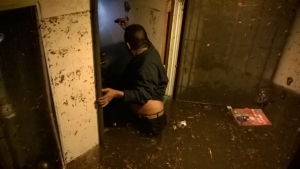 “I tried CPR,” Goetz posted on his Facebook page. “When I'd breathe in, I could hear him exhale the air I pushed in, but it was too late, just muscle reflexes.”  The dog died at the scene.

Goetz’s apartment on the second story was safe from flooding. But his car, parked in a below-grade carport/parking lot, was submerged (photo, below right.)  He does not know yet whether his car insurance will cover the loss.

Several other vehicles were also damaged or likely destroyed. He praised his landlord as a kind man who did not hesitate to pay for repairs including new tiles recently installed in his bathroom. 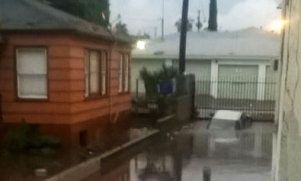 About 10 to 12 people have been displaced from their residences.  The apartment manager, who did not wish to have his name published, said he believes some went to a Red Cross shelter and others moved in with friends.  The shelter is at College Avenue Baptist Church located at 4747 College Ave., San Diego 92115. It will remain also tonight.

“I brought them some covers, some blankets the manager said of his displaced tenants, who he feared might be forced to sleep in their cars. “But when I came back, they were gone.”

Sadness shadowed his eyes as he talked about the damages.  “We don’t have any insurance,” he said.  He fears the four apartments could be a total loss. 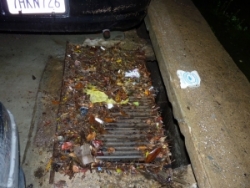 Gonzalez said she and her husband are friends of the Vasquez family.  “My husband works for a company, so we brought a pump,” she explained as her husband and other volunteers worked to help pump water out of the flooded home.  Water gushed from a hose over the sidewalk, swirling down the storm drain in the street, still partially clogged by leaves. 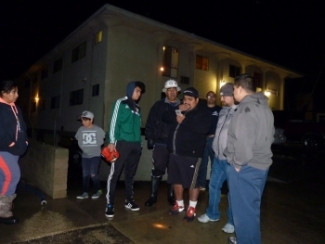 Several residents and neighbors interviewed said the fire department showed up, but did nothing to assist. Among them was Lourdes Ramirez, a neighbor who lives across the street. Significantly, she added, “I’ve been living here for ten years, and nothing like this has ever happened.”

Gonzalez voiced dismay at the lack of help from any authorities as of 10 p.m. last night, while neighbors huddled outside in the cold winter night, more than five hours after the flooding began (photo, right).

“The fire department came out. They said `We can’t do anything.’ Then they left,’” she stated.  She said the city’s water department was called, but had not come out.

Goetz said he saw what he believed to be a utility truck snaking out a drain on the street above the complex just a day or so earlier.  But all of the residents here voiced frustration that their drains were not cleaned, as far as anyone here could tell, anytime in recent memory.

For now, residents are left to deal with the tragedy alone.   The floodwaters have been pumped out of living units, but inside and outside, 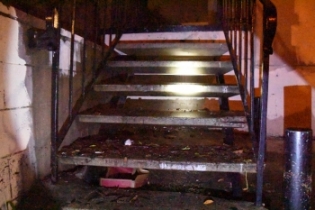 At the apartment unit where one man’s heroism no doubt saved lives, a muddy muck covers a courtyard, stairs, and the contents of everything inside the ground floor (photo, right).  The mud has a sour smell, like sewage, though why is unclear.  Nobody knows who will clean it all up, what the cost will be, or what health hazards may be lurking in the muck left behind that has permeated everything here. Trash, leaves, crushed bottles, and a broken toy lie scattered among the muck.

An older woman stood outside her downstairs apartment, a lost look in her eyes.  The tiny space where she lives now holds a jumble of furniture upended –a ruined couch, toppled chairs—as well as a floor lamp with mud caked on top and a dark water mark that stops about a foot and a  half below the ceiling.

“I lost everything,” she observed, shaking her head.  She is no stranger to adversity, or starting life over again. 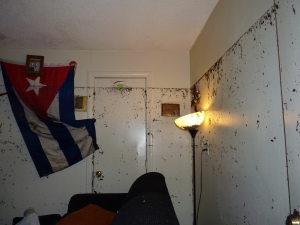 Nearly submerged on one upper wall hangs a Cuban flag hanging on the upper proud symbol of  her homeland (photo, left).

Back in October, the San Diego City Council did issue an emergency declaration in anticipation of the El Niño causing flooding. We asked Councilmember Marti Emerald, who represents City Heights, if that declaration could provide funds to assist these residents.

Ironically, back in November the City’s Environmental Committee unanimously called for the City Council to also seek emergency declaration to remove debris and vegetation clogging storm channels before El Niño storms hit.  The proposal met with opposition from Mayor Kevin Faulconer’s office due to concerns over litigation from environmentalists.

As of now, it remains unknown what government aid, if any, will flow to the residents of these flooded inner city homes, where hopes and dreams were washed away along with the torrent of muddy floodwaters.